"He’s just doing what’s written, he goes by the book. Mesira applies to all of earth, it doesn’t matter where. It’s like breathing, it’s like eating." 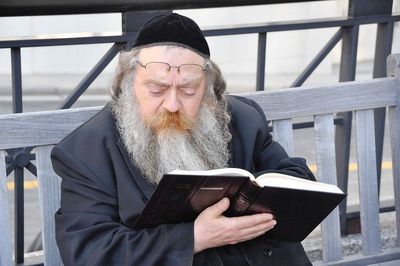 As U.S. District Judge Margaret Morrow contemplated federal law from her bench Wednesday morning, more than a dozen ultra-orthodox Jewish men with yarmulkes and sidelocks looked on in the courtroom. One held open a gilt-edged, elaborately embossed copy of the Shulchan Aruch, a book of Jewish law, tracing lines of the Hebrew text with his finger.

Appearing before the judge was Rabbi Moshe Zigelman, a 64-year-old devout Hasid who was refusing to testify before a federal grand jury, citing an ancient Jewish principle that forbids informing on other Jews.

Zigelman was ordered to testify in a tax-evasion case involving his Brooklyn-based Hasidic sect Spinka. He had earlier invoked the same principle, known as mesira, when he pleaded guilty to his part in the scheme in 2008 but refused to cooperate with authorities or testify in trial. He was sentenced to two years in prison.

On Wednesday, Morrow heard arguments on whether Zigelman should be found in contempt of court for his refusal, and once again be sent behind bars until he testifies. Morrow, who said her role was to apply the law of civil contempt to the rabbi’s situation, said she would rule at an unspecified later date.
A grand jury which had been on stand-by was ordered dismissed in the early afternoon.

"Because the transgression of mesira is so dire, my mind won’t change until I die," Zigelman, the son of Holocaust survivors and a teacher of scripture, said in court Wednesday through a Yiddish interpreter.

His attorney, Michael Proctor, said sending the man to sit behind bars would be futile because of his sincerely held belief in the principle and the consequences of violating it. He said the rabbi had obtained opinions from a respected rabbinical court in Israel and a Brooklyn Jewish legal scholar who both told him he should not testify.

"It’s not conceivable that he is going to, quote, break," Proctor told the judge.

Assistant U.S. Atty. Daniel O'Brien said, however, that the religious stance could serve as a "convenient tool" for those who had broken the law to hide behind. Because there are other Jewish witnesses whose testimony will be vital to the case, allowing Zigelman to avoid testifying has the potential to "stifle" the investigation, he said.

"He is not an innocent bystander, he is a partaker," O’Brien said.

The underlying case is a decade-long scheme in which Spinka and related charities solicited tens of millions in contributions from wealthy donors only to funnel between 80% and 95% back, allowing for tax breaks on the fake donation amounts. Zigelman pleaded guilty to one count of conspiracy to defraud the government for arranging the donations and coordinating money transfers.

Outside court, a rabbi who came to court in support of Zigelman said he knew the man wouldn’t give in on his religious conviction regardless of what sanctions he’s threatened with.

"He’s just doing what’s written, he goes by the book," Rabbi Rafael Simonton said. “Mesira applies to all of earth, it doesn’t matter where. It’s like breathing, it’s like eating."

Rabbi Rafael Simonton is either mistaken or lying.

There are textbook exceptions to mesira even for those who hold that mesira applies in a democracy.

One of those exceptions is when the government knows certain people are guilty but needs testimony from one of them or another Jew to convict or capture the others. (In other words, there is a difference between speculation and knowledge.

Another exception is when refusing to give the government the information makes it seem as if Jews (or Orthodox Jews) do not follow or respect the country's laws.

Hasidim use mesira to hide crimes and to enforce order in their communities.

It has nothing to do with the original intent of the mesira law, which was meant to save Jews from unjust punishments meted out by antisemitic governments, and from the unscrupulous Jews who used informing to hurt business opponents and social enemies, to extort them, and to gain favor from antisemitic government officials.

But in a democracy like the US, the fear of antisemitic unjust punishments does not apply.

The law of mesira would then only apply to spiteful informing done to settle personal grudges and the like, and it would not apply if the government was already convinced the subject is guilty.

In Rabbi Moshe Zigelman's case, the government already knows Zigelman is guilty of money laundering, and it has already put the Spinka rebbe and others in prison. And it knows there are dozens, if not hundreds, of other co-conspirators, and it knows many of their names.

This is a classic case where mesira would not apply.

And causing a chillul Hashem by refusing to give the governemnt the information it wants, by the way, is another textbook exception to mesira.

"He’s just doing what’s written, he goes by the book. Mesira applies to all of earth, it doesn’t matter where. It’s like breathing, it’s like eating."