« Kidnapped Boy Finds Mother Through Facebook | Main | Is This The Reason For The Timid Response To The Chabad Child Sex Abuse Scandal? »

Hasidic Rabbi Who Raped His Own Daughter Resentenced

Rabbi Israel Weingarten Re-sentenced To 30 Years In Prison
News Analysis: Hasidic rabbi raped his own daughter from when she was very young until she was able to flee her home at adulthood
Shmarya Rosenberg • FailedMessiah.com

He was sentenced to 30 years in federal prison.

But one count was later overturned on appeal because both legs of that particular trip were outside United States territory and therefore outside of US jurisdiction, and the case was sent back to the trial judge, Judge Gleeson, for resentencing.

Today that new sentence was handed down.

Originally, Judge Gleeson had sentenced Weingarten to ten years for each of the 5 counts, with the latter two to be served concurrently with the first three, for a total of 30 years.

Today, Judge Gleeson did essentially the same thing, giving Weingarten 10 years for each of the remaining 4 counts, with the last 10 to be served concurrently with one of the first 3 counts, for a total of 30 years in federal prison.

Judge Gleeson called Weingarten – who was known as a talmud chacham (a wise student of Jewish law and the Talmud) and who recently served as a sort of father figure for the ba'al teshuva students at Rabbi Leib Tropper's Kol Yaakov yeshiva in Monsey, New York – a "vicious predator."

Even today after his conviction, leading haredi rabbis in Monsey, Jerusalem, England and Belgium continue to support Weingarten and efforts to have his conviction overturned.

Because the daughter Israel Weingarten raped over the course of a decade and a half is no longer hasidic or ultra-Orthodox.

In other words, because this raped and abused woman chose to leave haredi Judaism after all the years these haredi rabbis covered up for her father and failed to protect her, her testimoney about her father's rapes is not deemed trustworthy by many of these haredi 'gedolim.'

For others, the mere fact that she is a woman is enough to disqualify her testimoney.

And for both groups of rabbis, Weingarten's status as a noted "talmud chacham" trumps whatever crimes Weingarten committed, just like Rabbi Baruch Lanner's kiruv, outreach, trumped his crimes according to his bosses at the Orthodox Union.

Modern/Centrist Orthodox rabbis have made real steps toward making sure nothing like the Lanner Case happens again.

Those steps are imperfect, and many of Lanner's enablers still play leading roles in Orthodox communal life. But real, concrete steps have been taken nonetheless.

But this is not true of the haredi community, where active coverups of child sex abuse are ongoing and victims are persecuted and intimidated by leading rabbis – an, sometimes, by thugs representing those rabbis.

Even here, with all the evidence against Weingarten, his conviction and the failure of his appeal, haredi rabbis are once again punishing the victim of sex abuse while protecting and supporting her abuser. 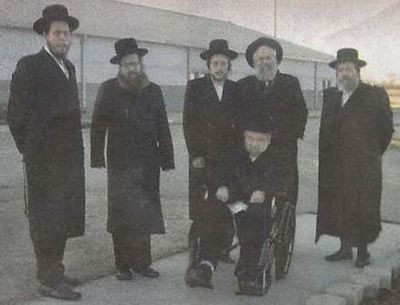 Hasidic Rabbi Who Raped His Own Daughter Resentenced