“The only thing left to do is beat these people up. Just find these people and beat them to a pulp. They’re cowards and only violence will quiet them down.” 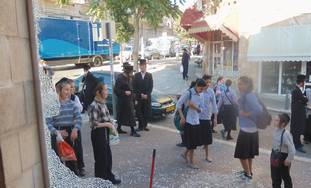 Or HaChaim's broken front window looking out from inside the store

A bookstore in the ultra-Orthodox neighborhood of Mea She’arim, which has been struggling with violence from a mafia-style “Purity Committee” that objects to their English and Zionist books, was attacked once again early on Wednesday morning.

Marlene Samuels, the manager of Or Hachaim/Manny’s Bookstore, found the outer windows of the shop smashed for the fifth time since the store’s opening in March 2010, and the second time in less than a week.

Radicals from the fringe anti-Zionist Sikrikim group have also glued its locks shut, thrown tar and fish oil at it and dumped bags of human excrement inside the store.

Jerusalem police spokesman Shmuel Ben-Ruby said the police had received a complaint and opened an investigation.

He added that the police are using intelligence gathered from a wide range of sources to try to stop the violence against the store.

The harassment of the bookstore stems from the bookstore’s refusal to accept demands made by the Sikrikim, a group of 60-100 extremists in Mea She’arim which demands all businesses observe specific “modesty standards.”

At Or Hachaim, the Sikrikim’s demands include putting up a sign asking customers to dress modestly and removing all English-language and Zionist books. Two weeks ago, owners of the store met with Sikrikim representatives to try to stop the violence, but no solution was found.

“Their list is too long, they want every English book out, they want the store, that’s the bottom line,” said Samuels.

“Nothing good enough for them, and we can’t take out the English books, we won’t have a business.”

She complained that the police have not helped them try to find the culprits, despite security camera footage that clearly shows the men breaking the windows.

Samuels said they had considered putting up steel shutters on the building to protect the glass, but she worried the Sikrikim would find a way to destroy that as well.

“The only thing left to do is beat these people up,” a frustrated Samuels said on Wednesday, the second time in less than two weeks that all of the store’s outer windows have been broken. “Just find these people and beat them to a pulp. They’re cowards and only violence will quiet them down.”

Samuels said that other store owners suffering from similar abuse had hired vigilantes to stop the violence and been successful, though she doubted that the owners of Or Hachaim/Manny’s would do that.

Many of the other stores in the neighborhood have acquiesced to the Sikrikim’s demands, though they complain of the “mafia-like” control the small group of extremists wield over the area.

Until the Post published an article a week or so ago about this, police had done nothing to stop the violence against the store, and were quoted publicly as saying they had no idea the violence was happening, while denying anyone had made police reports about it.

Suddenly there's publicity – sunlight, so to speak, and the police now claim to be investigating.

Security camera video exists showing these thugs breaking windows of the store and trashing it. The names of most of these thugs are known.

But Israel's crack police department claims it does not know those names or recognize those faces, and so it "investigates."

This is a lot like Israel's claim that it could not find Hosam Amara when the US wanted him extradited, even though Amara was living openly in his home and his address and phone number were known.

The cops don't want to fight with the Sicariim or Edah Charedit, so they're throwing the bookstore, its owners and the other effected shopkeepers and stores under the bus.

They are enabling haredi violence.

And this needs to stop now.

“The only thing left to do is beat these people up. Just find these people and beat them to a pulp. They’re cowards and only violence will quiet them down.”