Chabad has been engaged in a coverup of child sexual abuse at its Melbourne, Australia flagship institution since the 1980s, if not earlier. For the first time, here is proof of a small amount of that coverup. 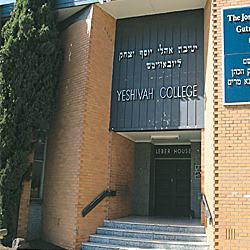 The following email was sent by the head of Chabad's Yeshiva College. In it, Rabbi Smukler repeats the falsehood that the incidents of child sexual assault at Yeshiva College were not committed by an employee:

Further to my letter of June 21, 2011, I am writing to provide you with a further update.

As you are aware, there has been media attention directed toward Yeshivah College regarding allegations concerning events around 15-20 years ago. The Victoria Police are investigating the allegations and the school is cooperating fully with the Police.  In relation to the more recent allegations reported in The Age on Friday, July 8th, 2011, the school has been advised by the Police that the allegations and investigations do not relate to a member of staff.
While we await the outcome of the Police investigation/s, the College expresses its sympathy to those who may have been affected in any way and we continue to offer counselling and provide support to anyone who feels this would be of benefit to them, at this time.
Anyone with any reports, information or concerns in relation to any of the allegations should contact Moorabbin Sexual Offences Unit (by telephone on 9556 6128 or 0414 181 311) or Crime Stoppers (on 1800 333 0000). This is a position that is fully supported by Rabbi Z. Telsner.
We are committed to providing a safe and nurturing environment for our school community and creating a school environment where students, staff, and parents feel comfortable to come forward with any concerns. We have invested much energy and resources in this area and will continue to do so, going forward.
In circumstances where the Police investigation is still in progress, we have been advised that it is inappropriate for the College to comment further or provide more details at this time. However, we will keep the school community advised of significant developments, if and when we are advised by the Police that it is appropriate to do so. In the interim, the College continues to cooperate fully with the Police.
Yours Sincerely

At that point in time, Chabad knew the police were investigating David Cyprys, a longtime employee of Chabad's Yeshiva College.

Cyprys was arrested in early September and charged with 29 counts of various forms of child sex abuse.

What follows are two copies of Cyprys's security personnel license from the Victoria police, one downloaded on July 14 and the other on September 19, both listing Cyprys as an employee of Chabad's Yeshiva Centre.

Before that is a record of Cyprys's arrest in 1992 for an indecent assault. At that time Cyprys was also working for Chabad's Yeshiva College.

Rabbi Yitzchok Dovid Groner, the head of Chabad in Australia allegedly covered up for Cyprys and allowed him to remain at Yeshiva Centre with unrestricted access to children. He and other community leaders were also apparently involved in getting Cyprys's 1992 charge knocked down to a minor misdemeanor punished by a fine.

Groner also covered up for David Kramer, a pedophile who taught at Yeshiva College, eventually putting him on a plane out of Australia so he could escape a looming indictement for indecent assault against a child.

Afterward, Kramer went to the US, where he went on to sexually assault children in a non-Chabad setting. A rabbi in St. Louis, Missouri formerly associated with Aish HaTorah (and then the rabbi of Nusach Hari Bnai Zion Congregation) discovered the sexual abuse and reported Kramer to police. He was tried and convicted and is now serving time in prison.

According to Victoria (i.e., Melbourne, Australia) police, the leaders of Chabad's Yeshiva College community have been uncooperative with the police investigations against Kramer and Cyprys and, apparently, other pedophiles.

In other words, Chabad is still covering up child sex abuse in Melbourne – and its world headquarters in Brooklyn, New York has been silent.

You can see that in an official press release about Yeshiva Centre published by Chabad in Brooklyn three days ago.

Published on Lubavitch.com, the offical website of Chabad's world headquarters in Brooklyn, the release trumpets Chabad's outreach work in Melbourne, focusing on outreach to kids. It makes no mention of the dangers these kids were exposed to because Chabad covered up for pedophiles.

But to brazenly trumpet Chabad's outreach to Melbourne children while remaining silent about the pedophilia and the coverups is unconscionable.

No one should trust Chabad or put their children in a Chabad camp, school or other institution until it becomes clear that Chabad World Headquaters and Chabad in Australia are really cooperating with police and that they are both being fully honest and transparent with the public and parents.

Chabad's release is posted in full below the three documents, at the bottom of this post. 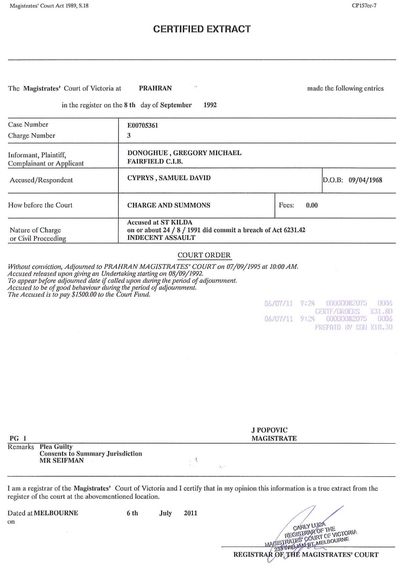 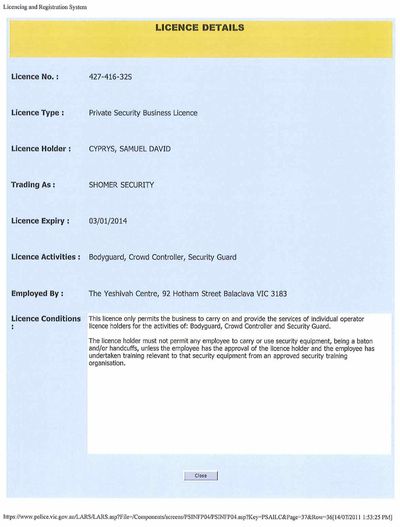 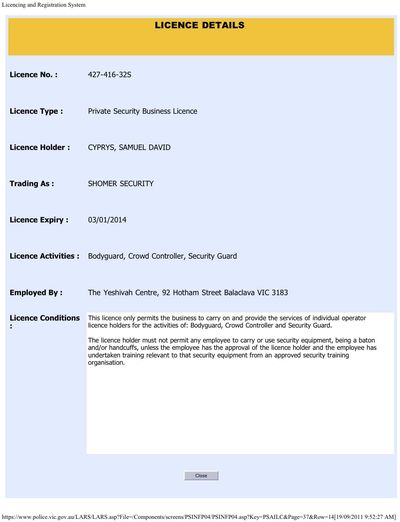 The building, six years in the making, “will finally provide a home for our programs, and a heightened sense of belonging and identity for Jewish youth,” says Rabbi Moshe Kahn, Director of Chabad Youth.

Jewish life in Melbourne appears strong and vibrant today. Melbourne’s Jewish population of 60,000 pick the low hanging fruit planted by early Australian Jewry who integrated into society so cohesively. At the end of the 19th century, Jewish Australians were present in every facet of social, economic and civic life – most notably, Sir Isaac Isaacs and Sir Zelman Cowen served as Governors General in 1930 and 1977 respectively.

Jewish people enjoy high visibility in an open society largely free of anti-Semitism. Schools, synagogues and a variety of Jewish social services complete the picture of the storied Jewish community in Melbourne.

And yet, Rabbi Kahn is quick to point out that “we have the same challenges for Jewish youth like anywhere else, like assimilation and intermarriage.” Cultural diversity and religious tolerance has also lead to an erosion of Jewish identity among thousands of Jewish youth.

To that end, Rabbi Moshe and Dina Kahn have spearheaded a full slate of programs since taking the helm of Chabad Youth in 1999. Today, hundreds of students at the Yeshiva College participate in after-school educational clubs, Shabbos meet-ups and holiday based events. During midterm break, hundreds of boys and girls camps attend winter camp, and over 1,000 kids attended Camp Gan Israel during last summer’s camping season in Australia.

While Chabad Youth is headquartered at East St. Kilda and focuses heavily on schoolchildren the Kahn’s have grown their network to include children, teens university students and young adults across the wider Jewish community.

Timmy Rubin, who runs the Mikvah Chaya Mushka for women points to a recent encounter at Bialik College -- a Jewish day school in Melbourne -- as an example of the outreach at Chabad Youth.

“A few weeks ago, a close friend of mine told me that her son was now putting on Tefilin every day, after having met some Chabad boys at the school,” she explains. The boys were part of the outreach program, or Mivtzoim, where young students visit schools, homes and businesses located outside their local Jewish communities.

In 2009, Kahn again raised the bar in the Jewish identity-building project with the introduction of Chabad Campus. Friday night dinners, weekly classes and host of events have now moved permanently to the new building and showing promising signs of growth.

It is important, he says, to be cognizant of the fact that for the most part, “students have little or no connection with anything Jewish.”

The Chabad Youth Center also includes a performing arts hall, a games room, administrative offices, multi-purpose rooms and a cafeteria and entertaining area. For the most part, Chabad Youth caters to the specific needs of the schoolchildren during their out of school hours, while the school uses the building during school hours.

The past several years saw a push to reach out to the wider Jewish community. In addition to administrative staff working in the new building and some 100 volunteers, Rabbi Kahn employs three young Shluchim couples that run educational programs in and beyond the local community. According to Kahn, Chabad Youth staff “comes into contact with 2,000 kids on a weekly basis.”

Inreach is also an important part of the Kahns’ activities. A unique synagogue tailored the needs of the school’s alumni draws a diverse crowd of 100 people aged 20-35 to Shabbos services and weekly classes at Daminyan, founded by Rabbi Kahn in 2007.

“Many graduates of our schools in this community often lose that connection they had when they were in school, but they gain that connection at Daminyan,” says Robin Aron, 33, one of the first members of Daminyan.

One of the most outstanding features has been “the normalcy of Jewish life,” writes the historian William D. Rubinstein. Indeed, since the first eight Jewish convicts waded ashore in 1788, Jewish life has flourished in a tolerant and welcoming society.

And at Chabad Youth in Melbourne, says Kahn, “we’re filling in the gaps.”

Chabad's 9-20-2011 press release about Yeshiva College and Chabad Youth of Melbourne as a PDF file:

Index Of Posts That Mention Cyprys By Name. (There are earlier posts that report about the sex abuse but do not mention his name, as well.)

Index Of Posts About David Kramer.

Chabad has been engaged in a coverup of child sexual abuse at its Melbourne, Australia flagship institution since the 1980s, if not earlier. For the first time, here is proof of a small amount of that coverup.