A Chabad rabbi and two rabbinical students walk 15 miles from Crown Heights to the Bronx each Shabbat morning to lead services in a tiny synagogue housed in a mosque. "We come to help the old Jewish people here," said Rabbi Meir Kabakow, 25. "We take care of them and help them pray." 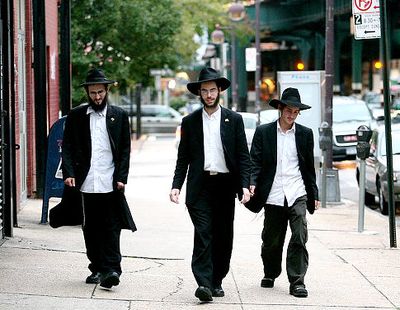 It could be New York's longest schlep: Every Saturday, young rabbis trudge 15 miles from Brooklyn to worship with some of the last Jews left in one Bronx neighborhood.

The ultra-Orthodox rabbis lead a small Parkchester synagogue housed in the same ramshackle building as an Islamic school and a mosque.

"It takes them four hours and sometimes the weather is terrible," said synagogue member Harvey Weiner, 82. "But without them, we'd be lost."

The rabbis and rabbinical students make the grueling journey - rain, snow or shine - because Parkchester's Jewish population has dwindled and the synagogue has no rabbi of its own.

Ultra-Orthodox Jews don't drive, bicycle or ride the subway on the Sabbath.

"We come to help the old Jewish people here," said Rabbi Meir Kabakow, 25. "We take care of them and help them pray."

On a recent Saturday, Rabbi Shmuel Notik woke at 5 a.m. Dressed in a black suit and a wide-brimmed hat, he left the world headquarters of the Chabad-Lubavitch sect in Crown Heights and walked briskly in the dark through Williamsburg.

Notik, 25, crossed the Williamsburg Bridge to Manhattan with the sun rising behind him and hiked up First Ave., all the way to East Harlem, pausing to drink at playground water fountains.

The slim, bearded rabbi crossed the Willis Ave. Bridge to the Bronx and strode past bodegas and auto shops on Westchester Ave., waving to curious passersby. "I don't get tired," he said. "Well, maybe in the snow."

Notik has trekked to the Bronx about 50 times since Jan. 1, 2008, when the Young Israel of Parkchester synagogue ran out of money and closed.

That day, he and a group of rabbinical students showed up unannounced at the synagogue's storefront on White Plains Road.

"It was our last service," said Leon Bleckman, 78. "We had no rabbi. They walked in and it was like the messiah coming down from heaven. It was a miracle."

Then Notik and his friends founded a new house of worship. Beis Menachem of Parkchester holds services in a scruffy Pugsley Ave. building that belongs to the Al-Iman Mosque and Islamic Leadership School.

During the week, Muslim students use the space to study the Koran. But on Saturdays, elderly Jews arrange battered folding chairs behind a lectern and sway as Notik reads from the Torah.

In the 1940s, there were seven synagogues in Parkchester alone and hundreds in the Bronx. But many of the borough's Jews have moved to Long Island and Westchester County.

Not Bleckman. The retired coat salesman is determined to stay.

"There are still Jews in Parkchester, but they don't know we have a synagogue," he said. "We need to get the word out. We need every soul we can get."

A Chabad rabbi and two rabbinical students walk 15 miles from Crown Heights to the Bronx each Shabbat morning to lead services in a tiny synagogue housed in a mosque. "We come to help the old Jewish people here," said Rabbi Meir Kabakow, 25. "We take care of them and help them pray."