Herzog Boulevard, the road that runs between the ultra- Orthodox neighborhood of Ramat Beit Shemesh Bet and the older Kiryat Aryeh Sheinfeld community, resembles a war zone. On one side of the tree-lined street black-hatted men and turban-clad woman stand on the sidewalk and the balconies staring across the street. Opposite are men donning knitted kippot and women in long skirts, clearly patrolling their territory. In the middle sits a flashing police patrol car. Several officers in deep conversation stand in a cluster. They are there to make sure things stay calm. 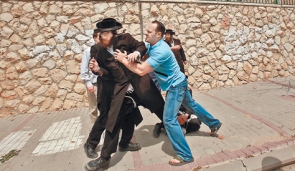 On one side of the tree-lined street black-hatted men and turban-clad woman stand on the sidewalk and the balconies staring across the street. Opposite are men donning knitted kippot and women in long skirts, clearly patrolling their territory.

In the middle sits a flashing police patrol car. Several officers in deep conversation stand in a cluster. They are there to make sure things stay calm.

It’s lunchtime on a weekday and the national-religious Bnot Orot girls school is about to ring its final bell. The school, which opened amid much controversy on September 1, has brought tensions between these two communities to the fore in recent weeks and highlights an on-going battle between the haredim (ultra- Orthodox) and the other sectors living in Beit Shemesh, a city of 86,000 residents.

Last Tuesday night, the haredi community, which accounts for roughly 40 percent of the city, held a mass protest to air their anger over the school’s presence, which is on their side of the street and which they believe was promised to them for use as boys’ school. They also say that the school’s dress code – the girls wear long skirts and long sleeves but no stockings – offends their moral standards.

On Sunday night, members of the national-religious community and more secular residents plan to march against what they see as haredi pressure to change the nature of the town.

“We have nothing against the national-religious community, the problem is all political,” said Shmuel Pappenheim, an active member of the haredi Ramat Beit Shemesh Bet community. “We do not understand why a national-religious girls school would have been built right next to the haredi community. The land was promised to us for a public buildings, and now the mayor has given it to them.”

Pappenheim said Mayor Moshe Abutbul (Shas), himself a member of the haredi community, had agreed to open the school as part of a political deal.

“We have been trying to discuss this issue for a few years but we were not successful, so now we will put up a fight our own way,” he said.

And “fight” is exactly what members of the haredi community have done, regardless of the fact that their targets have often been schoolchildren between six and 12 years of age.

According to reports from within the national-religious camp, over the past few weeks since the school opened, ultra- Orthodox men often stand nearby hurling insults such as “pritza” (“whore”) and “shiksa” ([a derogatory term for] “non-Jew”) or throwing eggs and feces at the girls as they leave school. Last week, two men, members of the extremist Sikrikim group, were arrested for egg-throwing.

“Look at the kids, look at their faces, they are visibly scared,” said community activist Dov Lipman, an immigrant from the US and one of those who has taken up the battle on behalf of the national religious.

Sure enough, as the children leave the school they look up cautiously at the balconies overlooking the street.

“Is it all quiet today?” one asks Lipman.

The boy reacts excitedly when Lipman tells him there has been no trouble so far.

“We have a group of adults, some do not even have children in the school, who come out here each day to escort the children as they walk home,” said Lipman, who is busily fielding phone calls inquiring about Sunday night’s demonstration.

“We will demonstrate in exactly the same place they [ultra-Orthodox protesters] did last Tuesday night, to show that we will not back down,” he said. “They are determined to make Beit Shemesh a haredi city and, I think, in other places they successfully intimidated local residents, but we will not run away.”

The planned demonstration and the daily escorts from school, however, have been only part of the response. Others, acknowledged Lipman, have taken matters into their own hands, posting photos of the men seen egging the schoolgirls and calling them pedophiles.

“It is not nice but it worked, those men did not show up again,” Lipman said. He believes that part of the determination to “stand up to the extremists” stems from the fact that many in Beit Shemesh’s national-religious community are immigrants.

“We are all relatively new olim and I think that makes us more determined to not let them destroy our dream,” he said, adding that the school is only part of the problem.

Indeed, a little less than two years ago tensions grew high when the ultra-Orthodox demanded responsibility for a local mikve ritual bath and, more recently, there have been several violent incidents on public buses that have been declared “mehedrin” or gender-segregated. The national-religious camp has already started to address the latter issue and will soon launch a counter-campaign called “Take a Seat” to fight the practice, which is illegal.

One woman who will likely abstain from taking part in planned civil disobedience against the segregated buses is recent US immigrant Rachel Levin Weinstein.

Weinstein, who moved to Beit Shemesh with her family in July, accidentally found herself on a “mehedrin” bus and describes the experience as “very traumatic.”

Writing about it on her blog http://rachelsjourneytotheholyland.blogspot.com, Weinstein, who refused to sit at the back of the bus despite threats from haredi passengers, labeled the post: “Rosa Parkenstein has arrived,” a reference to Rosa Parks, the black woman whose refusal to give up her seat to make room for a white passenger sparked the Montgomery Bus Boycott in Alabama in 1955.

“As we got on the bus, a man told my husband that it was a segregated bus,” Weinstein recalled. “I turned round to him and said, “Well it’s not segregated for me” and I sat down near the front.”

Weinstein said she was then verbally attacked by a woman who called her a “shiksa” and a “whore.”

“I was shaking and so angry, but I refused to move,” she said. “I do not understand this behavior, a Jew is a Jew and it should make no difference where I sit on a bus.”

A request from The Jerusalem Post to interview the mayor did not receive a response.

However, municipal spokesman Matitiyahu Rosensweig commented: “We have nothing new to say on this matter, it is not a new issue. Despite the involvement of national government offices in the [Bnot Orot girls school], which has served to disrupt our efforts, the mayor continues to make efforts to solve the problem and bring the two sides together.”

The school was always intended to be a Mosern Orthodox girls' grade school, and that the girls who are "causing" sexual temptation for these haredim are little children.

Moshe Abutbul apparently promised it to haredim anyway, confident that he could get the Modern Orthodox to accept a different building.

Shmeul Papenheim is the former spokesperson for Eidah Charedis, the Mea Shearim based haredi umbrella organization. He has been involved in widespread rioting that included attacks on police.

His involvement most likely means that this will become another haredi cause celebré, with rioting that could spread to Jerusalem.

If that happens, look for Israel's national government to back down and force out the Modern Orthodox girls.

Herzog Boulevard, the road that runs between the ultra- Orthodox neighborhood of Ramat Beit Shemesh Bet and the older Kiryat Aryeh Sheinfeld community, resembles a war zone. On one side of the tree-lined street black-hatted men and turban-clad woman stand on the sidewalk and the balconies staring across the street. Opposite are men donning knitted kippot and women in long skirts, clearly patrolling their territory. In the middle sits a flashing police patrol car. Several officers in deep conversation stand in a cluster. They are there to make sure things stay calm.