« Should Chabad Be Allowed To Erect A Sukkah In A NYC Park? | Main | Judaism Without God »

Rabbi Chaim Malinowitz is a rabbi in Beit Shemesh, a hotbed of haredi violence. He's also the general editor of Artscroll's Talmud series. Beit Shemesh has seen haredi thugs attack and beat Modern Orthodox teens, stone little Modern Orthodox boys, throw eggs and tomatoes at little Modern Orthodox girls, and make terroristic threats against those children. But Chaim Malinowitz won't publicly condemn this violence or the haredi gedolim who support it because he doesn't want to "polarize" the jewish community and because he doesn't want haredim scapegoated. 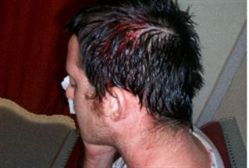 A Modern Orthodox teen beaten by a mob of haredi men last year on Yom Ha'atzmaut because his sister was celebrating Israel's Independence on a public street and the anti-Zionist haredim did not like that and attacked her. Her brother defended her and was beaten by the haredi mob.

Rafi G has a report on Rabbi Chaim Malinowitz's refusal to pony up and act like a man.

Rafi is much more polite about this than I am, of course. But Malinowitz is absolutely wrong.

That halakhic construct requires a public response to this type of violence.

Malinowitz tries to wish this away with all types of rationalizations, but in the end, the truth is twofold:

1. Rabbi Chaim Malinowitz agrees with the aims of the haredi thugs and their handlers.

2. Rabbi Chaim Malinowitz is too cowardly and too uncaring to stand up and do the right thing.

Remember this when you next consider spending money on an Artscroll published or Artscroll distributed book.

Black type is the questioner. Green type is Rabbi Malinowitz:

In an attempt to reach some lowest common denominator between the various communities in Beit Shemesh, a number of community members have put together the attached petition.

The idea is to cleary denounce harassment, both verbal and physical, as unequivocally unacceptable.

I am afraid I will not sign the petition ---because I will not be meshatef pe'ulah with people that I hold have a definite anti-chareidi agenda here, loving every minute of this, and painting all "chareidim" with the same brush. And demanding, actually demanding, that 'chareidi people' condemn what is going on because "they" have a special responsibility to do so to show that they do not approve.

To my mind,this is like demanding that every Italian condemn bank robbery after the Mafia pulls off a job. That every Russian condemn murder after the Russian mafia has someone killed. That every Jew condemn financial fraud after Bernard Madoff was arrested. That every white condemn the KKK after they burn a cross on a black's lawn.

That a few (hired, by the way) kooks who should be arrested and thrown in jail have managed to give a black eye to RBS and BS in the eyes of outside circles is entirely the fault of the people I refer to in my first sentence. They are kvelling at this opportunity to show "the true face of chareidi Jewry". And it is not the first time they have gone public to "expose chareidim".

By 'officially' condemning what is condemned by any sane person, I am playing their game. And so I will not.
I will not officially - 'as a Chareidi rabbi'-- condemn the actions perpetrated by these hired kooks, just as no Jew should condemn officially, as a Jew, what Madoff did "to show that all Jews are not like that", and no white should officially condemn, as a white, the lynching of a black.

There is no greater polarization of the Jewish people that can be perpetrated than to demand that any chareidi must show that they do not approve of these hired kooks' actions. So much for the 'achdut' people.
Shavua Tov


Thank you for your response. I wish to share my thoughts.

This is not about achdut. It's about addressing a context in which the kooks operate. I will explain.

When Rabin was murdered I worked in Tel Aviv. The contemptful looks I received for many months were so many that I lost count. At first, my thoughts were similar to what you write below.

Then I read R. Lichtenstein's piece on Rabin's assassination. Bottom line summary of that piece as I understood it: While the overall national religious community was not directly responsible for the murder, elements of our community did, indeed, create the tone and context in which it took place. It was time to re-think our value system, epsecially in terms of prioritization of values. That the hilonim were kvelling didn't stop R. LIchtenstein from writing what he thought to be true.

My thoughts: while the overall haredi community is not responsible for what's going on in Orot, elements of the mainstream have, over the years, set the context and tone. Empty cart (really? empty??); Rabbit eaters! This is a Jew??; Mouthpiece of R. Elyashiv on R. Drukman: apikores be-mezid; R. Kanievsky (re: R. Chaim Amsalem's position on conversion): apikores; A very moderate haredi Rav who I respect deeply and whom you know very well: "This is not a Jewish state. It is a state run by leaders who are partly descended from Jews."

I wish to point out that there are plenty of leaders in the mainstream haredi community who never took part in setting such a tone: Rav Moshe and Rav Shlomo Zalman are just two. There must be others still alive.

I would have hoped that while certain elements of the community are kvelling, it wouldn't stop anyone from saying what needs to be said.

May I publish this conversation?

Yes--as long as you publish every word that I said, including this response to your response (you may leave out this sentence).

I will not give my opinion about what R. Lichtenstein said. But I do know that here it is totally untrue (I speak of the actions of the hired kooks vis-à-vis the chareidi world.) These are the same hired kooks that were hired to yell and say tehillim and blow shofar at people going to a real-estate "fair" selling apartments in RBS Gimel because of some supposed kevarim that were there. (It was near my Shul; I recognized them when I saw a video) The only thing that stopped them them there from acting the way they acted here is that they were facing adults. Nu, what value system of chareidism brought that about?

And so I don't agree.

And by the way--may I demand that you condemn those who polarize the Jewish people by reinforcing what they purport to condemn in order to further personal agendas?
I am not a communal leader. Nobody gives a hoot what I think. You are a communal leader. Lots of people care about what you think.
Maybe, maybe not.....but I explained my reasoning already for not speaking out in an official capacity. It reinforces the polarizing, and lays a guilt trip on chareidim. Sorry, I'm not playing.
Those who quickly made this a case of us against them --would they do so if a chareidi robbed Bank Mizrachi?
If a charedi robbed Bank Mizrachi in the name of the Torah, and if R. Kopschitz sat on the dais of a gathering organized by the robber, then I hope so.

R' Kopschitz is not a kook. Rav Kopschitz was doing what that community does when the kooks get the headlines. They make a harmless asifah about the inyan and rail against it..this marginalizes the kooks within their community even more, and lets steam be let out in a harmless way, and shows that their leaders agree in principle for what is being fought for (that the school should move out). That is how they function. You may not like it, you may want the asifah to be against the violence, you may not like the idea that they are advocating the school's moving--but that is not the point. This is their way of cooling tempers. (I do not want a discussion about that --I was merely addressing Rav Kopschitz's intentions, to answer your questions)

I had and have no problem with people in my Shul going to Orot to try to minimize the girls being traumatized (although I have no personal knowledge if it was necessary; and also whether or not it exacerbated the situation). I had and have a huge problem if they "go as chareidim"
I am glad you had no problem with that. Thank you for not opposing that.

I repeat--I do oppose it if they "go as chareidim".

And sir : This is most definitely NOT a "Jewish State ". It is at best a State of Jews. I suggest you read The Jewish State: The Struggle for Israel's Soul by Yoram Hazony, and just about everything Moshe Feiglin writes.
Kesivah vachasimah tovah.

State of the Jews but not Jewish State is a legitimate position, albeit one with which I firmly disagree. State run by leaders partly descended from Jews is not legitimate, I believe.

R. Kopschitz was seated on the dais of the protest organized by the kooks. Is R. Kopschitz a kook?

Please see below a few additional thoughts.
from: Chaim Malinowitz
to: C
dateSun, Sep 25, 2011 at 7:33 AM
subjectRe: petition

Important mainly because of your interaction with messages in the conversation.

I cannot continue this back-and-forth for lack of time. But I cannot leave you saying things that are not so .
You can do what you want with this, you can even have a last word--but not to me, for then I will be forced to answer..and only if you do not edit even one word from what I write.
rczm


The kooks do claim to be acting in the name of the Torah.
So what?
Does that make a special responsibility of chareidim to condemn their actions? By your reasoning (and that is PRECISELY my point ) any Torah-observant Jew should ; why are chareidim given a special responsibility?Polarization, my friend, and points scored, that's why. I'm not playing.
kesivah vachasimah tovah
RCZM
----…

Rabbi Chaim Malinowitz is a rabbi in Beit Shemesh, a hotbed of haredi violence. He's also the general editor of Artscroll's Talmud series. Beit Shemesh has seen haredi thugs attack and beat Modern Orthodox teens, stone little Modern Orthodox boys, throw eggs and tomatoes at little Modern Orthodox girls, and make terroristic threats against those children. But Chaim Malinowitz won't publicly condemn this violence or the haredi gedolim who support it because he doesn't want to "polarize" the jewish community and because he doesn't want haredim scapegoated.