« Founder Of Save A Torah Charged With Fraud | Main | Breaking: Newspaper Apologizes To Chabad Rabbi For Reporting The Truth »

Rabbi Yehuda Levin, who last month blamed the murder of an 8-year-old Brooklyn boy on the passage of marriage equality in NY, has posted a new video in which he claims yesterday’s earthquake on the east coast was because G-d is angry about homosexuality.

Says Levin: “We saw today an earthquake. The Jerusalem Talmud tells us that one of the reasons that God brings earthquakes to the world is because of the transgressions of homosexuality. The Talmud states, ‘You have shaken your male member in a place where it doesn’t belong. I too, will shake the earth.’”

And here is the direct link to the video on YouTube, where the following warning appears when the video is clicked on: 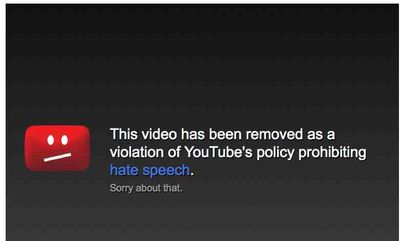 Levin is a nutcase who is a disgusting, loudmouthed bigot. He's someone I've often attacked and who deserves to be refuted and ridiculed.

I wasn't able to watch this latest video of his, but I question YouTube's censorship. Its past deceptive behavior censoring IDF videos (more links for this are posted below) and videos from conservative pundit Michelle Malkin should frighten anyone concerned with free speech. Niether group of videos violated any YouTube policy or were outside of normal political discourse – even though they were posted on YouTube at a time when normal political discourse was far nicer than it is today.

YouTube and its parent company Google engage in types of politically motivated censorship that are, quite frankly, disgusting.

Google's dominant position in Internet search and advertising, like YouTube's in user uploaded video, make this even more worrying than it otherwise would be.

It's long past time for the US Department of Justice to look at Google's monopolies and its near-monopolies and break them up, before we reach the day when the only political speech we read, hear or see is speech Google has first censored.

Update 3:30 pm CDT – Fortunately, someone ripped the video before YouTube banned it and uploaded it to their own account. Here it is [via Heeb]:

Posted at 04:01 PM in Bans & Censorship, Haredim, Homophobia and its Discontents | Permalink