« DA's Safe Stop Program For Lost Kids Starts Today | Main | The Bible Made Her Do It! Woman Gets Probation For Botched Home Circumcision Done With A Box Cutter »

An IDF reserve officer and two soldiers claim they were humiliated by haredim and the Egged bus company yesterday after boarding a bus in the haredi city of Bnei Brak. 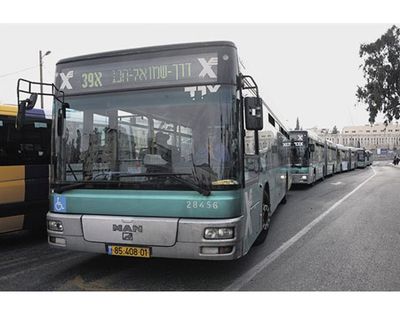 Soldier, Go To The Back Of The Bus!
IDF soldiers claim they were “humiliated” by haredim, bus company
Shmarya Rosenberg • FailedMessiah.com

An IDF reserve officer and two soldiers claim they were humiliated by haredim and the Egged bus company yesterday after boarding a bus in the haredi city of Bnei Brak, the Israeli news website Ynet reported today.

The soldiers boarded the to their base in Sefat, a town in the Northern Israel that kabbalists consider to be one of the Land of Israel’s four holy cities.

When he boarded the bus, the officer says the bus driver told him that he might have to stand during the long trip, because seats on the bus are reserved, and the officer hadn’t made reservations.

Surprised because he had seen no notice about reservations on Egged’s website and because reservations are not the norm in Egged’s bus system, the officer joined two other soldiers and sat in an empty row.

At that point, the officer claims that haredi passengers began to harass the three soldiers, accusing them of taking reserved seats that belonged to haredim.

"Why are soldiers, who do not pay, allowed to ride the bus?" the passengers yelled as the officer tried to ignore the complaints, he told Ynet.

At that point, an Egged inspector arrived and yelled at him the other soldiers and, according to the officer, told them to "get up and let real Jews sit."

When the bus left for Sefat, it still had several open seats.

According to Ynet, Egged claimed in a statement that the busline is part of a pilot program for haredim traveling to holy sites in Northern Israel. As part of the program, passengers can choose to reserve seats.

In an interview with Ynet, Egged’s spokesman Ron Ratner claimed the soldiers refused to get up when ordered by the driver and by the inspector.

Israel’s High Court recently ruled that such segregation was legal – but only if was absolutely voluntary and if no means of coercion, physical or otherwise, were used. Noncomplying females who refuse to move to the back of the bus were to be left undisturbed.

Despite the High Court’s ruling, Egged and other Israeli public transportation companies have continued to give in to haredi demands for increased gender segregation and for bus lines structured to keep non-haredi passengers away, creating de facto haredi-only lines.

Because Israel’s haredi population is disproportionally poor, they also make up a disproportionate amount of public transportation users. The economic clout that brings is one reason why Egged and other public bus companies meet demands that are discriminatory to women and to the non-haredi population. But the ever-present threat of haredi boycotts and demonstrations, along with the tepid response of Israel’s right wing government – which depends on haredi support to stay in power and which often tries to find ways to skirt or ignore the High Court’s rulings – also play significant roles.

Haredim rarely serve in the army. Many receive yeshiva exemptions that allow them to study rather than submit to the draft. That study often continues until the student is too old to be drafted or to serve in the reserves. It also precludes working, and many haredi families are on welfare as a result.

Attempts to modify this system by creating all haredi army units or by structuring a type of civilian national service for haredim have been met with strong opposition from most haredi leaders.

Haredi demonstrations against perceived Sabbath law violations, grave desecration and other issues have often turned violent, with rocks, bottles and other objects hurled at police and soldiers, who are often called Nazis by haredim.

An IDF reserve officer and two soldiers claim they were humiliated by haredim and the Egged bus company yesterday after boarding a bus in the haredi city of Bnei Brak.