"Any movement which teaches its children only Torah is a modern aberration," says haredi Member of Knesset Rabbi Haim Amsalem. 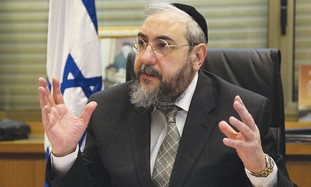 A call to rehabilitate haredi education
Traditional Torah sources teach in the clearest of terms that learning a trade to support one’s family with dignity.
Member of Knesset Rabbi Haim Amsalem • Jerusalem Post

Hundreds of thousands of students begin a new school year today. Some will learn basic Judaism and Torah along with general studies. Some will study Torah in the mornings and general studies in the afternoons, and some will learn Torah exclusively. While the minimal degree of Jewish content in the more secular schools saddens me, I am even more troubled by the third category described above. The haredi world in which I live does not educate children in accordance with Jewish tradition.

Haredi schools not following Jewish tradition!? Aren’t they the ones who do uphold tradition? Haven’t the more modern movements veered from the path?

The answer is simply that any movement which teaches its children only Torah is a modern aberration.

Traditional Torah sources teach in the clearest of terms that learning a trade to support one’s family with dignity – alongside Torah study and living a Torah-observant lifestyle – is the highest of ideals. For example, in the Jerusalem Talmud, Peiah, Chapter 1 interprets the Torah’s instruction to “choose life” as a command to have a trade. The Babylonian Talmud, Kiddushin, 29a teaches that “a father must teach his son a trade. Anyone who does not teach his son a trade is as if he taught his son robbery.” The Midrash on Ecclesiastes Chapter 9 instructs: “Acquire for yourself a trade together with Torah.” The Babylonian Talmud, Brachot 8a goes as far as saying that “a person who earns a living from his own handiwork is greater than one who fears heaven.” Finally, Wisdom of our Fathers Chapter 2 states emphatically that “any Torah not accompanied by work will end up being nullified, and will lead to sin.”

All the above sources no doubt served as the basis for the teaching from Maimonides, himself a world-class Torah scholar and physician (Laws of Torah Study 3:10-11): “Any person who makes the decision to study Torah without a livelihood and to sustain himself from charity – such a person desecrates God, disgraces Torah, extinguishes the light of religion, causes bad for himself, and removes himself from the World to Come… and our sages also commanded that a person should not earn a living from Torah… It is a high level for a person to earn a living from his own toil and a trait of the saintly. Through this, a person earns all the honor and good in this world and the next.”

This approach continued until the past few hundred years. For example, the 15th century Orchot Tzadikim (309), teaches that “A person must find middle ground with two responsibilities and set aside hours for Torah study and for work in this world, and must strengthen himself to do both… neither should take away from the other.” The famed Maharal of 16th century Prague relates in Netivot Olam that “when a person is busy with two pursuits – work to provide for what his body needs and Torah for completion of his soul – he will not find any sin.”

So it is clear that Jewish tradition advocates intensive Torah study together with learning a trade. In our times, this means teaching students whatever they need to earn a university degree – the primary path for earning a livelihood in today’s world. (I also advocate joint yeshiva and university programs – a topic for a future column).

Lest one think it is impossible to provide an intensive yeshiva education while studying language, mathematics, science or history, a glance at the yeshiva world in the US proves that highschool students attending the most haredi institutions – Lakewood, Torah Va’daas, Philadelpia, Chaim Berlin, Telshe, and more study all these subjects as mandated by US law. This provides students with the option of university study, which many pursue, and produces well-balanced and worldly Torah scholars who bring sanctity to God’s name in the workplace and earn great respect for their communities.

I must make two important clarifications. Maimonides, at the end of the Laws of the Sabbatical and Jubilee years, elaborates on the benefits of doing nothing but studying Torah. The Ohr HaChayim, one of the greatest biblical commentators of the early 18th century, explains that this teaching refers to a person or group who wants to support a full-time Torah scholar in a partnership. Maimonides, in the Laws of Torah Study quoted above, is referring to a person who places a burden on the nation through his learning, and essentially forces others to support him. If someone has a private arrangement by which he does nothing but study Torah while receiving the support of a private individual, this is a blessing.

I personally love nothing more than quiet moments alone with the Talmud, or studying the Parsha with my children, and cannot imagine a more beautiful lifestyle. However, as Maimonides states, no person can choose to place the burden of supporting him on the community. This is exactly what the haredi school system does.

Clarification number two relates to our need as a community to produce elite Torah scholars. It has always been part of our tradition to identify a select group of young men who have the potential and drive needer to spend their entire lives studying Torah and we, as a community, should not only support them but should feel blessed to have that opportunity. The number in each generation who fit these criteria is quite small, but even today we should find those elite scholars and spare them any worry about having to earn a living.

I have extensive plans to establish a system of government-funded schools to provide haredi boys with the opportunity to reconnect to authentic Jewish study of Torah and general studies, enablinge them to sustain their families with dignity. I bless all our students with a successful and fruitful school year, but will not cease to work toward rehabilitating the haredi system as an MK and through the Am Shalem movement. It is time for the haredim who claim to fight for authentic Judaism to truly live by that lofty ideal.

The writer is an MK, and the founder and chairman of the Am Shalem political movement.

"Any movement which teaches its children only Torah is a modern aberration," says haredi Member of Knesset Rabbi Haim Amsalem.