"She introduced herself" to the rabbis, said Rabbi David Zwiebel, executive vice president of the Orthodox Jewish organization Agudath Israel. "A similar group has gotten together with Governor Romney and will get together with other candidates as well." 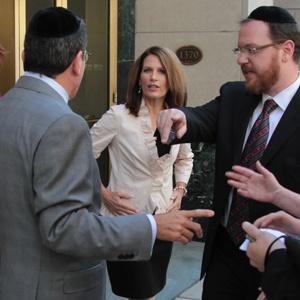 Republican presidential hopeful Michele Bachmann may not be Jewish -- despite a misperception among some political donors -- but that didn't stop her from making a campaign stop in the Big Apple yesterday to talk up her pro-Israel positions.

The same day The Post reported that some Jewish donors are holding back their contributions to GOP front-runner Mitt Romney under the mistaken impression that Bachmann is one of their own, the Minnesota congresswoman was addressing a Jewish group here.

"We're meeting with people all across New York who are interested in my candidacy," Bachmann said as she ducked into a Broadway office building for a small, private sit-down with Orthodox Jewish leaders.

Bachmann spent about an hour at a private office discussing issues ranging from same-sex marriage to security for the Jewish state. She reminded the group she worked on a kibbutz in Israel 40 years ago.

"She introduced herself," said Rabbi David Zwiebel, executive vice president of the Orthodox Jewish organization Agudath Israel. "A similar group has gotten together with Governor Romney and will get together with other candidates as well."

The rabbis have met previously with President Obama, who owned the Jewish vote in the 2008 election but is having trouble because of his administration's stance on future borders for Israel.

Bachmann, an evangelical Christian, offered brief opening remarks yesterday and then took questions. She portrayed herself as "a person of faith," Zwiebel said, but he added that "cuts both ways" for Jewish voters because of his community's strong belief in the need for religion and government to be separate.

When it was over, Bachmann made a quick exit.

Neither Bachmann nor her campaign would disclose details about her day in New York and she had no public schedule. She is set to be in Iowa today for a Tea Party event.

The timing of yesterday's session had nothing to do with the latest headlines about fund-raising or last weekend's controversy over Bachmann's comments on the earthquake and hurricane that hit the East Coast in the last week, Zwiebel said.

During events in Florida, Bachmann suggested God was issuing a wakeup call for the federal government to curtail spending. Following some controversy, Bachmann's campaign said the remarks were made in "jest."

Bachmann again downplayed the seriousness of those comments during yesterday's meeting and scored high marks among many in the room.

"She's really a very interesting person, very personable," said Leon Goldenberg of Goldmont Realty Corp. in Brooklyn. "She comes across more shrill on TV. She's certainly making a lot of waves. She has to be taken seriously."

"She introduced herself" to the rabbis, said Rabbi David Zwiebel, executive vice president of the Orthodox Jewish organization Agudath Israel. "A similar group has gotten together with Governor Romney and will get together with other candidates as well."