Jerusalem's ultra-Orthodox sector is preparing to set up an alternative market as part of its boycott on the veteran Mahane Yehuda Market. According to haredi Jerusalem City Council Member Shlomo Rosenstein, the market will be open to men only in the morning hours and to women only in the afternoon. 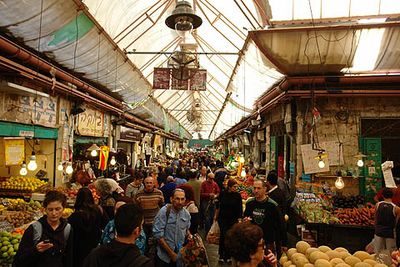 Haredim to set up 'modest' market
As part of boycott on Jerusalem's Mahane Yehuda, ultra-Orthodox planning alternative market which will serve men, women at different hours of the day
Tzipi Malkov • Ynet

Jerusalem's ultra-Orthodox sector is preparing to set up an alternative market as part of its boycott on the veteran Mahane Yehuda Market. The City Council's haredi factions convened earlier this week in a bid to locate a suitable area for the new market.

The haredim declared war on the market, its famous Mahneyuda restaurant and street parties held in the city center throughout the summer. They were mainly enraged by the Balbasta Festival held in the market, which they said were a demonstration of immodesty and immorality.

Senior haredi officials and rabbis were invited last week to attend an urgent discussion on the matter. During the meeting, the rabbis asked City Council members to ask the Jerusalem mayor to relocate the street parties from the city center to the Malcha or Talpiot neighborhoods.

They demanded that the Balabasta Festival be canceled, threatening to boycott Mahane Yehuda and open their own market if their request was turned down.

Members of the haredi factions decided this week to push for the establishment of an alternative market on an area between the neighborhoods of Ramot and Ramat Shlomo.

According to the plan, the market will be open on Wednesdays and Fridays and will sell vegetables, pastries and sewing notions, but no meat, fish or dairy products. In addition, it will adhere to the strictest modesty rules.

Municipality: No change in plans

Meanwhile, Mahane Yehuda's merchants are trying to practice restraint. Shimon Darwish, head of the Mahane Yehuda Merchants Association, said they had no plans to give in and would conduct business as usual.

He added, however, "We are open for a dialogue. If the haredim want to talk to us, we're willing to listen." The events, he said, will continue as planned in any case.

"There is no immorality here, and we're shocked at the fact that the haredim are referring this way to singers performing world music," added Yaron Tzidkiyahu, one of the owners of Tzidkiyahu Delicacies.

Some of the merchants said this was all a haredi act of revenge against Mayor Nir Barkat, who allowed private investigators to follow senior officials at the haredi education department suspected of falsifying their timesheets.

The Jerusalem Municipality issued the following statement in response: "There is no change in plans. The municipality's cultural initiatives have turned the city into an attractive place for investors and young people.

"The mayor has doubled the budget of cultural institutions and tripled the number of events. Hotel occupancy has gone up by 30% and an impressive rise has been recorded in hotel revenues. The municipality will continue promoting culture for all sectors in order to boost the city's economy."

Posted at 07:02 AM in Bans & Censorship, Haredim, Israel | Permalink

Jerusalem's ultra-Orthodox sector is preparing to set up an alternative market as part of its boycott on the veteran Mahane Yehuda Market. According to haredi Jerusalem City Council Member Shlomo Rosenstein, the market will be open to men only in the morning hours and to women only in the afternoon.