Rabbi Rafael Halperin died at his home in the central city of Bnei Brak on Saturday afternoon, following a serious illness. Halperin was a former professional wrestler. 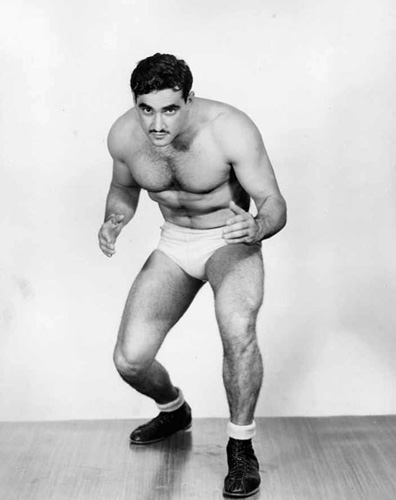 Rabbi Rafael Halperin died at his home in the central city of Bnei Brak on Saturday afternoon, following a serious illness. Halperin, 87, was a former professional wrestler and the founder of a chain of optical centers in Israel.

Halperin was born to a religious family in Vienna in 1924. As a young man in Israel, he engaged in body building and gained international fame when he won the world championship in free wrestling.

His son says he was a great source of pride, "after all the Jewish refugees arrived from Europe after the Holocaust and saw him fight – and win – a German wrestler, while wearing pants with a Star of David on them."

From world championship to world of Torah

Thirty-five years ago, Halperin took a change of direction and resumed his Torah studies. "He would sit for 13 hours a day, and wouldn't get up from his chair," his son says.

"At the time he sold all his businesses. About 15 years ago he opened an eyewear business for charity in Bnei Brak, and because it was for benevolent purposes, it expanded to 128 stores. Father was thus responsible for the drop in the prices of eyeglasses in Israel."

In the past few years, Halperin dedicated his life to Torah research and published several books, including a study on the different aspects of Rashi, the author of a comprehensive commentary on the Talmud.

The Halperin family says he managed to fill up the Yad Eliyahu Stadium three times in his life: Once when he fought a Jordanian in free wrestling, then when he pressured the Israeli government to secure the release of (former Prisoner of Zion Natan) Sharansky during US President Ronald Reagan's term, and finally with his battle for Shabbat, when he established an association calling on Jews to observe Shabbat.

"Father donated to people whose homes were burnt, and would renovate them and buy them new clothes and furniture. He also renovated ritual baths and synagogues and was very modest."

Halperin decided that he wanted to open a chain of athletic facilities, so he began wrestling professionally to earn the necessary money. His career took him to the United States, where he was reported to have won 159 consecutive matches. He earned the displeasure of some promoters and fellow wrestlers because he treated his matches as legitimate athletic contests rather than a scripted performance. He refused to yield, however, as he felt that he was upholding the dignity of his country. He also wrestled as a face (fan favorite), refusing to break any rules, for the same reason.[2]

Halperin continued to wrestle in the United States and Canada into the 1960s. During this time, he faced such opponents as Antonino Rocca while competing for Capitol Wrestling.[2] He later returned to Israel, where he is credited with popularizing professional wrestling.[4]

From the Yiddish Forward in 1953 (translated by the English Jewish Daily Forward):

Who would have thought that one of today’s most popular wrestlers was once a yeshiva bokher who studied with such talmudic luminaries as the Hazon Ish? Rafael Halperin, the currently undefeated Israeli wrestler, paid a visit to the Forward. In a juicy Yiddish peppered with talmudic anecdotes, the Vienna-born, Bnei Brak-raised Halperin told how his father was a man of principle who believed that one must learn to make a living and not sit around all day in a yeshiva. All of the Halperin brothers became businessmen, and young Rafael became an expert in the diamond business. But one day about six years ago, after seeing a weightlifting magazine, Halperin became interested in physical culture and began to work out. His yeshiva friends made fun of him, but he pressed on. Inclined toward business, Halperin opened a gym in Jerusalem, which eventually grew to a chain of 53 gyms throughout the Jewish state. His bodybuilding paid off; in 1950 he was named “Mr. Israel.” An American wrestling promoter who was visiting Israel suggested that Halperin come to the United States and become a wrestler, which he did. Since then, he has become successful, though he won’t wrestle on Friday nights, when most of the matches take place.

Rabbi Rafael Halperin died at his home in the central city of Bnei Brak on Saturday afternoon, following a serious illness. Halperin was a former professional wrestler.