Escape From The Cult

Her detailed testimony about the physical, sexual and emotional abuse inflicted on the household's women and children led to an investigation that ended with the police and welfare authorities raiding the house. The women and children were sent to shelters; the cult leader and two others were arrested. 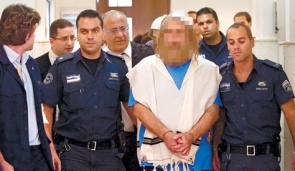 Young woman recounts her escape from Israeli cult
Testimony of physical, sexual and emotional abuse led to an investigation resulting in police raid. Cult leader and two others arrested.
By Tamar Rotem • Ha’aretz

In mid-May, a young woman called the Israel Center for Cult Victims, asking that her identity be kept secret. "I live in a Jerusalem collective," she told center director Rachel Lichtenstein. "I'm not certain, but I think it's a cult."

That call led to the exposure of the Jerusalem cult whose ringleader, D., was indicted yesterday along with two other members.

In several meetings with center staffers, the caller, in her early twenties, revealed the story of her life in D.'s house. She later agreed to complain to the police. Her detailed testimony about the physical, sexual and emotional abuse inflicted on the household's women and children led to an investigation that ended with the police and welfare authorities raiding the house. The women and children were sent to shelters; D. and two others were arrested.

Now, according to her lawyer, Ami Savir, the complainant will be the key prosecution witness in the trial.

The complainant's courage is impressive. She was the youngest of the household's women, and apparently the only one who ever escaped from the cult.

She arrived in D.'s Jerusalem home at age 18, after growing up in a religious household in the center of the country, and lived there for a year and a half as his intended wife (he already had six ).

"Even a normative person can fall into the net of manipulative people who speak about truth," Savir said. "But she was an 18-year-old girl who, after her parents' divorce, was seeking her way in life. She was fertile ground for persuasion."

On a trip to Jerusalem, near the Calatrava Bridge where D.'s wives and children begged for alms and expounded on his teachings, one of the women approached her, having apparently been ordered by D. to recruit more women.

"Initially, she knew only the woman who approached her, not the other members of the group," Lichtenstein said. "The woman exposed her to Bratslav [Hasidic] teachings, to the writings disseminated by group members, and she slowly warmed to the idea. Then she was told about the leader, whom the women viewed as a kind of tzaddik [righteous man] and prophet. At this stage, she hadn't yet met him and didn't know he was married to several women."

She began visiting the house, but "only once she was ensnared was she brought to live in it," Lichtenstein said.

Yet even though she was under D.'s spell, "she had some kind of critical sense that caused her not to marry him, even though he constantly raised the issue," Lichtenstein added.

Savir said the gap in their ages - D. was 55 to her 18 - made him realize that persuading her would take time. D. didn't even sleep with her, differentiating her from the other women, Savir added.

It took the complainant, whom Savir described as utterly normative and quite impressive, hours to tell him about her experiences in D.'s house.

"It was shocking," he said.

First, she was cut off from her job and family, then came a "lengthy process of brainwashing and deification" of D. by his wives, who portrayed him as the direct heir of Rabbi Nachman, the founder of Bratslav Hasidism. Eventually, aided by what the complainant described as D.'s charisma, she came to believe this, "and by virtue of this faith, he was able to control, dominate, administer beatings, threaten, humiliate, demand confessions, and rape," Savir said.

What finally caused her to leave, Savir continued, is that "she started being beaten. But even before then, she had witnessed acts of abuse and sexual licentiousness.

"One day, she was subjected to half an hour of [D.'s] blows. She saw him whip one of the women with a rod, and also witnessed incidents like a woman who dared to nod off while he was speaking being put into an ice-cold shower and then sent outside to dry off in the freezing cold. For a lengthy period, one girl went around with a shaven head as a punishment and was permanently barred from participating in meals, because she was ostracized."

D. imposed strict rules, and all the women and children were required to confess to him about their acts and thoughts, Savir continued. "Punishments were handed down even on account of thoughts. In one case, a boy was punished for having a sexual fantasy."

The result was blind obedience to D.'s every wish - making the complainant's decision to escape even more remarkable.

Everyone in the household was convinced that D. was a prophet, Savir continued. That enabled him to threaten that dire things would befall anyone who disobeyed him, and to claim obedience would bring spiritual enlightenment. The complete absence of all contact with other people, especially family, bolstered his rule, as did collective participation in punishments: "If the punishment was a beating, they would all join in."

The complainant's escape was not an all at once happening: She made several attempts that ended with her return, after D. sent his women to entice her back.

"The enticements were spiritual," Lichtenstein said. "He would tell her, 'don't forfeit your salvation. Salvation will be here any minute.' That's something that happens in all cults."

After her family tried to remove her from the cult, D. also threatened that terrible things would happen to them, Savir said.

About six months ago, she finally managed to escape for good. Now she is starting to rebuild her life: She is in counseling and has already begun to work. D.'s arrest and indictment have encouraged her.

But she's still afraid to reveal her name.

Escape From The Cult

Her detailed testimony about the physical, sexual and emotional abuse inflicted on the household's women and children led to an investigation that ended with the police and welfare authorities raiding the house. The women and children were sent to shelters; the cult leader and two others were arrested.