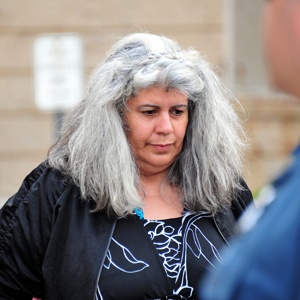 Silver-haired Gloria Suarez, angry over losing her summer job Monday as a maid for Rabbi Yitzchok Hayempour and his eleven children, told cops she took baby Esther because "the baby would get more love and attention from me than she would ever get from (the Hayempours)."

Hayempour allowed Suarez, 55, to stay in their home until Wednesday, which is the only time the maid said she could get back into her Manhattan apartment, said Tammy Hayempour, 42, Esther’s mother.

On Wednesday morning, Suarez asked if she could spend time with the baby before she left, Tammy said.

Unbeknownst to Tammy, Suarez used her goodbye time to change Esther out of her pink clothes and into a blue boy’s outfit – with sleeves long enough to cover a distinct birthmark on the baby’s forearm, the mom said.

Suarez then took the baby in her arms and fled the house on foot without the baby’s stroller, cops said.

Rabbi Hayempour was driving back from a bris he was attending when he saw Suarez walking with his baby, and he stopped his car to ask the woman where she was going.

Suarez eventually hopped a cab to the Roslyn Railroad Station in Roslyn Heights, where as she waited for a NYC-bound LIRR train. Meanwhile, Esther’s frantic family contacted cops, stopped buses, and reached out to every local cab company – and located the company that took Suarez to the train station.

Suarez was arrested at the station, but not without a fight.

"I fought them off and would not give her to them, but they were eventually able to get her," Suarez told cops.

Esther’s relieved mom said she never thought Suarez would be the kidnapping type.

"She wanted a child and she told me many times. I should have been suspicious," said Tammy.

At her arraignment at Nassau County First District Court this morning, Nassau prosecutor Melissa Lewis said Suarez intended to "take the child out of the county. . . and out of the country to Uruguay."

Suarez was arraigned on charges of kidnapping and resisting arrest. She is being held without bail.

…The maid, Gloria Suarez, a 53-year-old native of Uruguay, had been in the United States for 11 years on a work visa. Ms. Suarez had been a live-in maid with the Chayempours over the summer months. She was hired through an agency that vets and does background checks on all the maids that they refer before recommending them for hire.

According to the family, Ms. Suarez had finished working for them this past Friday and had moved her belongings out, but she had requested to stay a few more days until she had arranged her new place to stay, which the Shluchim allowed.…

He asked his wife if she let the maid take the baby out, and she responded that she had not left Esti alone with her, and that she didn’t even know that she had left.

Right away family members began a frantic search, going store to store, and mobilizing the community to search for the maid. Minute to minute it became increasingly clear that this was, in fact, an abduction.…

Nassau County Police were notified, but the police were reluctant to rush and classify the incident as an abduction, saying that they needed to wait more time, and that maybe the maid would show up with the infant.

This wasn’t satisfactory to the family, and the father’s own frantic search led him back to the CVS, where he ran into a member of his community who recommended that he check the local bus station, since that would be a preferred method of travel for the maid.

Of the only two bus lines that run in the area, Yitzchok ran over to the bus stop and asked one of drivers if he remembered the maid, who has very distinct long silvery hair. To his luck, the driver remembered dropping off a pair with the exact description! He even remembered dropping her off near Stepping Stone Park.

The father rushed over to the park where he met the park security and asked them if they had seen the maid with a child. Once again thanks to her distinctive appearance they had remembered the maid, and that she thought that the park was a train station. Thinking she was confused, security called a taxi for her, but they did not know what her destination was.

It was around this time that the police started getting proactively involved in the search. After learning that the maid had gotten into a cab, the police reached out to all the local cab companies, and moments later got a response from one of them saying that they had just dropped off a pair of passengers matching the description at the Roslyn Train Station.

Roslyn Police were immediately notified and they rushed over to the station, where they found the maid with the baby standing on the platform waiting for a train. When police asked her whose baby it was, she replied that it was her own. When they inquired further, she changed her story, saying it was her brother's child and she was going to meet him.

When police attempted to take the maid into custody, a struggle broke out as she refused to part with the baby; only after some negotiations did she give in and police placed her under arrest.…

And according to Chabad.info, during the crisis, the baby's mother did this:

“When my husband came into the house looking for Esti and Gloria and we started looking for them, I wrote in to the Ohel [the Rebbe's grave], and that is when we started getting leads which ultimately lead to us finding our baby” said Tamar.

This would appear to have been done before police were called.

That police would not classify the incident as an abduction in the first few minutes after they were contacts is normal, because they don't want to choke the Amber Alert system with thousands of false cases, which would make the entire system useless.

In other words, inconsistent stories and confusing or add behavior by family members did not help police recognize the incdent as a kidnapping.