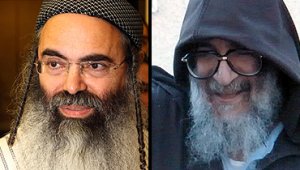 Never one adverse to exploting tragedy to pimp his own agenda, Rabbi Amnon Yitzhak told an audience in Tzefat that Rabbi Elazar Abuhatzeira was murdered last week because of, well, Lipa Schmeltzer, Mordechai Ben David, Avrahm Fried and a dozen or so other hasidic and haredi singers and their songs.

Yitzhak drew this conclusion by using some forced gematria (numerology) and by his implied special connection to the Divine – a.k.a, his narcissistic personality disorder.

Yitzhak also warned that a giant Tsunami would soon swamp Israel and destroy it.

Ban the singers and their songs, of course. And "return" to 'authentic' haredi Judaism – especially the variant led by Amnon Yitzhak.

You can read more about Yitzhack's cheap exploitation and his delusions in Hebrew on Kikar Shabbat.

Related Post: Haredi 'Gadol' Does Not Know What A Music CD Is.