Jennifer McCann and Pierre Bazile gave the court formal notice yesterday that they would be introducing psychiatric evidence at trial, the first step in an insanity defense. 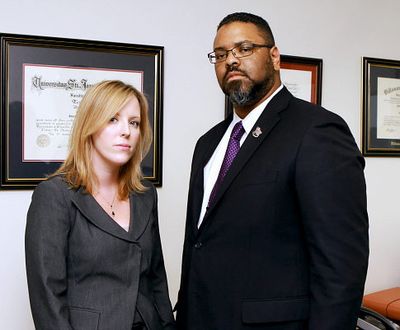 After being castigated by a judge for incompetence and inexperience, a reprimand some say was both unwarranted and extremely rare, one of Levi Aron's attorneys tells the New York Times the groundwork for an insanity defense for the confessed killer of 8-year-old Leiby Kletzky:

Separate from their court appearance on Tuesday…Ms. McCann and Mr. Bazile gave formal notice that they would introduce psychiatric evidence at the trial, a filing necessary to pursue an insanity defense, Ms. McCann said Tuesday.

A decision on whether to use an insanity defense could still be months away, she said, as the defense is still vetting psychiatrists to examine Mr. Aron.

While castigating the defense attorneys, Judge Neil Firetog attacked them for using Facebook to defend their client. Here is how McCann responded:

Ms. McCann explained that she used Facebook to respond to a group that was harassing her: “It was the quickest, easiest way to resolve my issues so the phone lines aren’t clogged up. I have a business to run, Your Honor.”

The Times also notes that Levi Aron's family is paying Bazile and McCann.

Jennifer McCann and Pierre Bazile gave the court formal notice yesterday that they would be introducing psychiatric evidence at trial, the first step in an insanity defense.