Angered by a Jerusalem municipal parking lot that operates on the Jewish Sabbath, haredim plan a mass protest to marl the 100th consecutive week the parking lot has opened on Shabbat. Previous protests have been violent, with some turning into full scale riots. But haredim say this time, the protest will be different. 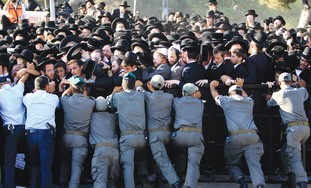 The Eda Haredit ultra-Orthodox movement is calling on the haredi public to resume protests against the desecration of Shabbat in Jerusalem, starting with a mass rally this Saturday at the capital's Mea Shearim neighborhood.

Saturday's protest will mark two years and 100 Shabbats since the municipality began operating the Karta parking lot in the on weekends.

In ads posted in Jerusalem's ultra-Orthodox neighborhoods and published in the Eda Haredit's journal, its rabbis call on the public to participate in a mass protest Saturday afternoon on Haneviim Street, between Mea Shearim and the city center, "in honor of our holy Shabbat."

No women or youth

Under the title, "One hundred Shabbats for God", the ads charge that the desecration of Shabbat in Jerusalem "humiliates the city of God", and therefore the protests must be reinforced.

The upcoming rally is expected to be attended by the Rebbe of the Toldos Aharon dynasty, one of the movement's leaders.

The rabbis stress in the ad that the public must avoid riots and acts of vandalism and violence, and therefore the protest must last up to 30 minutes and exclude children and teens, as opposed to the rallies two years ago which were attended by thousands of children.

The Eda Haredit leadership is forbidding women to take part in the demonstration as well, stressing that "supervisors on behalf of the Badatz (court of justice) will oversee the aforementioned."

The rabbis are linking the obligation to protest against the desecration of Shabbat to the weekly Torah portion, which deals with the zealotry of Pinchas, who killed an Israelite and a Midianite woman for their sins. The ad quotes Torah verses praising Pinchas, who "made atonement for the children of Israel".

The protests began about two years ago, after the District Court decided to open Jerusalem's Karta parking lot on Saturday in order to solve the parking distress in the capital on weekends.

…“Such events just serve the interests of the extremists on both sides,” Rabbi Shmuel Pappenheim of the Eda Haredit said of the large demonstration planned.…

Last week, secular protesters arrived in clown garb. They say police are not doing enough to ensure the freedom of passage on that route from haredi blockage and stones. It is the last main artery open in the area now that Jaffa Road has been closed in favor of the light rail due to start operations on August 19.

This Saturday’s ultra-Orthodox demonstration will be held on Rehov Hanevi’im due to the presence of summertime tourists in immodest dress near the Karta garage, Pappenheim said. To expose the young Eda Haredit men to such spectacles would be counterproductive, he said.

As for the demonstration at whole, “We don’t want to appear as Yoelish Krois [the "unofficial" "street operations captain" – i.e., chief thug – of Edah Charedit] people. On the other hand, if the head of the Eda Haredit Rabbinic Court, Rabbi Tuvia Weiss, tells us to go and demonstrate, we do,” he said.

Krois was arrested on Wednesday morning on charges of tax evasion [sparking hundreds of ultra-Orthodox to riot, hurling iron bars, stone and bottle at police, injuring six policemen and leading to five arrests] and he is under house arrest in Bnei Brak. Police deny any connection between the planned weekend protest and his detention, which was over a 10-year alleged misdemeanor [not paying taxes, operating without a license] involving Krois’s fowl slaughterhouse.

Pappenheim said it was Weiss who decided to keep the weekly demonstrations going, but apparently the initiative of [the Toldos Aharon Rebbe] to have a larger one this weekend, and now the Toldot Aharon leadership is anxious to ensure that the event will pass peacefully and they won’t be held accountable for any escalation that increases Shabbat desecration. [I.e., more ultra-Orthodox riots.]

Pappenheim laughed away the theory according to which the Eda Haredit intensifies its demonstrations against the secular elements of the city and the state in the summer, since that is when members of the Israeli hassidic sects make the trip to the United States to raise money from wealthy members of the groups for the next year, and photos of haredim confronting police over the sanctity of Shabbat help open wealthy Jewish anti-Zionist pockets.

“All kinds of academics try to find reasons and make theories to explain things,” he said.

“But the truth of the matter is that most of our money-raising trips take place in the winter. Nobody is in New York now, it's vacation time,” he said. “They’re all in the Catskills.”

Posted at 02:26 AM in Crime, Litigation, etc., Haredim, Israel | Permalink

Angered by a Jerusalem municipal parking lot that operates on the Jewish Sabbath, haredim plan a mass protest to marl the 100th consecutive week the parking lot has opened on Shabbat. Previous protests have been violent, with some turning into full scale riots. But haredim say this time, the protest will be different.