The Finkler Question And Infidel 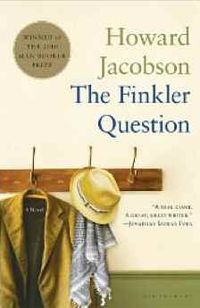 Howard Jacobson may not be a household name in the US, but in the UK he recently won the Man Booker Prize for his novel The Finkler Question. It deserves a place on the shelf alongside Philip Roth’s Operation Shylock. The Finkler Question concerns itself with Jewish identity, anti-Semitism, and schlemiels, just like the Roth novel. What is original and refreshing about the Jacobson book is that the schlemiel in question is not Jewish, and the knowing insiders are.

Julian Treslove is a loser, both erotically and professionally. He is a post-modern man without a deep sense of identity. He looks to his friends Finkler and Libor with envy. They seem to be grounded in a way that the goy Trelsove is not. The two men are widowers— Finkler is a public intellectual and Libor was the beloved teacher of both Treslove and Finkler back in their college days. Treslove is not a widower, but has had a disastrous love life that included an affair with Finkler’s wife, when she was still alive.  In fact, Treslove calls all Jews Finklers, a compliment in his mind.

Treslove imagines himself a spiritual Finkler after he is taken for a Jew during a mugging. This incident intensifies his already ongoing quest to discover what Finklerdom means. In fact, a flashback reveals that Treslove’s affair with Tyler, his best friend’s wife, is less of an erotic or amorous one than it is an exploration into the Finkler question. Despite the sordid possibilities of such a liaison, the reader does not lose sympathy for the hapless Treslove. Treslove is a lost soul, and the affair is yet another example of his flailing about to find meaning in his life (through unraveling the Finkler question). Alas, Tyler Finkler cannot provide him with what he seeks— she is a convert.

A more healthy relationship, with a born-Jewish woman, almost redeems Treslove by giving him the emotional and spiritual nourishment he seeks.  Hephzibah is a nurturing Earth-Mother type, and as a bonus is related to Libor. Yet this relationship is too burdened with Treslove’s mishegas to succeed.

Other aspects of Jewish identity are also explored by this novel. Libor is a sentimental Zionist who lovingly mispronounces Israel as “Isrrrae…”  This irritates the fashionably anti-Zionist Finkler, who even founds an organization called ASHamed Jews. The ASHamed Jews comically try to outdo each other in their outrage and self-righteousness. In America, support for Israel is broad and deep in the Jewish community. However, among academic Jews in the UK, it is common to join the bash-Israel bandwagon. Hence the question of Israel is far more problematic across the pond. Treslove enjoys the contretemps between Libor and his former student, but doesn’t take sides. It is hard to see where the author stands, either, since both sides are portrayed with a mixture of sympathy and satire. But significantly, even Finkler looses patience with his ASHamed Jews.

The religious aspect of being a Jew is also given short shrift. Libor and Finkler are secular intellectuals. Of course Tyler, as a convert, seems to be a bit more interested in the spiritual aspects, but not by much. (And she is dead in the present tense of the book, and lives only in flashbacks).  Jacobson stands firmly with the American Jewish novelists such as Roth and Bellow, who are deeply cultural Jews, but do not observe.

Jacobson also stands within the English tradition of comical novels of ideas. There are not many American novelists who can write about deadly serious topics without being deadly serious. Once again, Philip Roth comes to mind, as exception to this rule. I recommend The Finkler Question as an entertaining summer read that will also make you think. 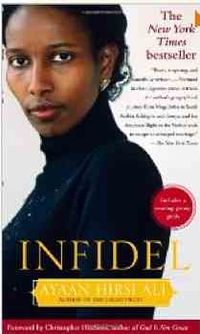 Religious questions, albeit not about Judaism, are front and center in Infidel, an autobiography by Ayaan Hirsi Ali. Ali is a former Muslim, who abandons her faith over its inner contradictions, as well as its treatment of women. Born in Somalia, educated in Kenya and the Netherlands, she is no cultural relativist. After harrowing experiences such as genital excision, beatings, and an arranged engagement, Ali comes to embrace Western values such as equality, secularism and individuality. Her experiences illustrate how too much tradition is as stifling as rootlessness is disconcerting. If the fictional Treslove wanted an identity to latch onto, Ali was born with it in spades: Muslim, Somali, clan member, female. Like Stephen Daedalus in A Portrait of the Artist as a Young Man, she chooses exile and cunning (but not silence) to escape the nets that the past would throw at her.  Yet she barely escapes these snares with her life; she is forced to flee the Netherlands after Muslim fundamentalists make her life there untenable. This has not silenced Ali. She currently lives in America, and is still speaking out for women’s rights in the Muslim world.

Taken together, the two books (both are works of literature, even if Infidel is non-fiction) pose uncomfortable questions for contemporary Jews: How can identity be maintained when everything today is optional? What is the nature of identity? When is identity oppressive? Maybe there are no ultimate answers for these questions, but they are still worth asking.

The Finkler Question And Infidel