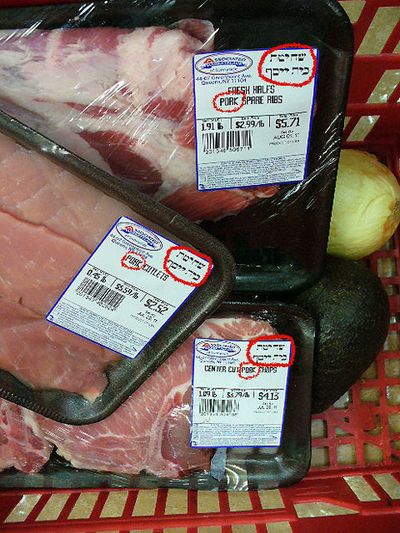 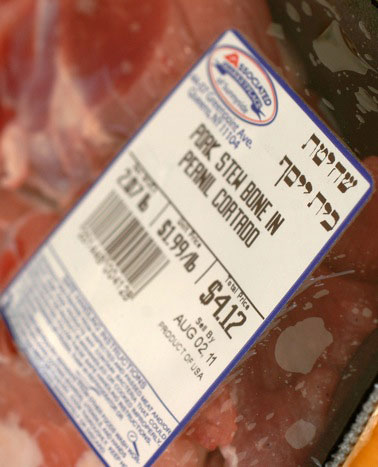 …[I]f you want actual Kosher pork—pork spare ribs, pork cutlets, center-cut pork chops, all labeled in Hebrew “Sh’Chita K’shera Beit Yosef” (i.e., kosher)—you get that only in New York, only at the Associated Supermarket at 4407 Greenpoint Avenue, in Sunnyside, Queens, and only for a few hours today, between the time the Israeli artist Oded Hirsch snapped the above photo on his cell phone and it got forwarded to me, and the time I phoned Aris Duran, the supermarket manager, for an explanation.

“What are you saying?” Duran asked. “Pork cannot be kosher.” So I e-mailed him the photo. He called me right back, and said he was going to pull all the meat off the shelves. “It was a mistake,” he said, and a few seconds later he called back and left a message to say, “Thanks for alerting me.…

Yosef is also misspelled as "Yaysef" or "Yiysef," with two yuds instead of a yud and a vav.

I think it is safe to say that supermarket staff has acess to kosher labels when a mashgiach is not present. I wouldn't buy any kosher meat at this supermarket until you are satisfied that problem has been dealt with effectively.