« Government Cuts Secular Studies In Religious Schools | Main | New Square Arsonist Due In Court Today – Will There Be Justice? »

Jerusalem police are preparing a large security contingent for this year’s event. Over one thousand police officers, border police and volunteers will protect marchers as they make their way through Jerusalem. Activists are pushing for a hate-crimes bill that would make attacks against minorities, including homosexuals, a more serious crime. 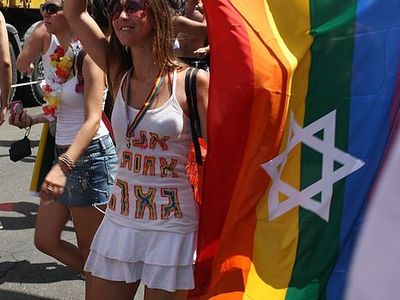 Gay Pride returns to Jerusalem
March planned in solidarity with other social demonstrations currently sweeping Israel, most notably the housing protests; over 1,000 police and volunteers to provide security in light of past violence.
By Nir Hasson • Ha’aretz

Israel’s LGBT community will march Thursday in Jerusalem’s annual Gay Pride Parade, an event that in past years has sparked great tension and violent clashes in the city.

This year’s march takes place in a show of solidarity between Israel’s movement for LGBT rights and the wider social struggles currently sweeping the nation, principally the housing protests.

Violence at the Jerusalem Gay Pride reached its apex in 2005, when an ultra-Orthodox man attacked some of the marchers with a knife, wounding one of them.

In the past four years, in the wake of a decision by rabbis of the ultra-Orthodox community to ignore the march, Jerusalem Gay Pride has taken place without incident.

Despite this, Jerusalem police are preparing a large security contingent for this year’s event. Over one thousand police officers, border police and volunteers will protect marchers as they make their way through Jerusalem.

“Any attempt by any person to disrupt the order will be dealt with in a decisive and tough manner,” a police statement said. So far, opponents of this year’s march seem to be satisfied with a virtual protest via Facebook and online petitions.

Jerusalem Open House, which organizes the Gay Pride march every year, has decided to the march will join the battle cry of the housing protests. “We will walk with the pride flag in one hand and the flags of the rest of the social protests in the other,” said Yonatan Gher, director of Jerusalem Open House.

A tent city has been set up for over a week in Gan Ha'atzmaut in Jerusalem, the site of the starting point of the Gay Pride. This protest site has not joined the main tent city in Jerusalem, which pitched up in a park in the Horse Park in central Jerusalem.

One of the tent cities will even address the crowds at the outset of the march. 2011’s Gay Pride will take a more political course than those of previous years, with marchers making their way from Independence Park towards the Knesset.

The organizers of Jerusalem’s Gay Pride stress the difference between this march and Tel Aviv’s annual Gay Pride, which is seen as a far more jovial affair.

Jerusalem Gay Pride is more focused on the struggle for LGBT rights, and on human rights in general. The date of the march is also significant: it is the second year anniversary of the Tel Aviv gay youth center shooting in which two died and many more were injured.

Main roads in Jerusalem will be closed to traffic for the duration of the march, which starts at 4 P.M. on Thursday. The organizers expect a couple of thousand marchers to participate, and hope that the wave of protests currently sweeping Israel will strengthen the LGBT community’s struggle.

Here is the Jerusalem Post's coverage:

Open House Executive Director, Yonatan Gher, called Thursday a “combined social struggle,” which will have at least three distinct protests imbuing the city with the air of social fervor. Indeed, protesters will include the doctors marching towards Jerusalem, students and families camped out in tents across the city, and thousands of gay-rights activists marching downtown.

Thursday’s pride march will also mark the second anniversary of the shooting attack at Bar-Noar – the community center for gay and lesbian teens in Tel Aviv in 2009 – that left two dead and 15 wounded.

The theme of this year’s march, led by Jerusalem’s Open House, is “Intertwined Paths,” honoring the way the gay struggle has dovetailed with popular struggles for equal rights, housing, minimum wage and other social issues. The theme was chosen four months ago, but is especially resonant given the current tent protests sweeping the country, which are entering their second week.

Unlike gay pride parades across the world, which include colorfully festooned floats and provocative costumes celebrating the spectrum of sexuality, the Jerusalem march is more subdued and political.

“Jerusalem has less to party about and more what to protest about,” said march organizer Anat Kremein. “It takes place in one of the most ancient cities in the world, and we’re proud to be marching in this city – in the spirit of the city – but we’re not trying to be like other gay parades. We’re marching proudly, without putting emphasis on sexuality. The emphasis is on solidarity,” she added.

Major streets in downtown Jerusalem – from Independence Park to the Knesset, including parts of Agron, Rambam, and Rupin – will be closed to traffic starting at 4:00 p.m., until the march passes.

Jerusalem police are deploying more than 1,000 police, border police and volunteers to keep order and protect the marchers.

Meanwhile, some 1,000 ultra-Orthodox are expected to attend a legal counter-protest in Kikar Shabbat in the Mea Sharim neighborhood of the capital, similar to last year, said Jerusalem police spokesman Shmuel Ben Ruby. There are no legal counter-protests planned for the parade route.

Thursday’s event will start at Independence Park, with speakers and performances, and march to the Knesset for a rally with music and activists in the Wohl Rose Garden.

The march will be led by MKs Sheli Yachamovich (Labor) and Nitzan Horowitz (Meretz), the second openly-gay Knesset Member. Speakers include MK Zehava Gal-On, and Rachel El Gabsi Bohadana, whose partner, Fabiola Bohadana, was killed in the Carmel fire in December. She is now fighting to have the state recognize her relationship so that their 18-month-old daughter can access the benefits given to the victims of the fire.

Other speakers will talk about the gay community and the struggle for affordable housing, religious acceptance and other social issues.

Previously, the Jerusalem pride march has been held in early June, closer to Tel Aviv’s pride weekend, which drew 70,000 people this year. Organizers decided to move it to coincide with the anniversary of the 2009 attack in Tel Aviv, which claimed the lives of Nir Katz, 24, and Liz Troubashi, 17, when a masked gunman burst into the Bar-Noar center and sprayed a room full of teenagers with bullets. Fifteen were wounded. The attacker still has not been caught.

Gher, the executive director of the Open House, said that the protest in front of the Knesset on Thursday would have a renewed call for police to catch the perpetrator, and also call for the victims of the attack to be recognized as terror victims in order to receive support and compensation from the state.

Additionally, activists are pushing for a hate-crimes bill that would make attacks against minorities, including homosexuals, a more serious crime.

Posted at 10:17 AM in Homophobia and its Discontents, Israel | Permalink

Jerusalem police are preparing a large security contingent for this year’s event. Over one thousand police officers, border police and volunteers will protect marchers as they make their way through Jerusalem. Activists are pushing for a hate-crimes bill that would make attacks against minorities, including homosexuals, a more serious crime.