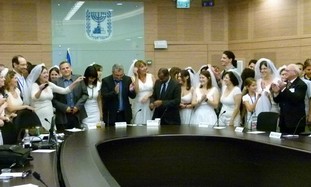 Knesset votes down civil marriage, divorce option
Justice Minister says bill "stands in contrast to norm since the establishment of Israel," marriage and divorce according to halacha.
By JONAH MANDEL • Jerusalem Post

The Knesset on Wednesday voted down an attempt to open the option of civil marriages and divorces to Jews in Israel.

“Israel is the only democracy in the world where Jews don't have freedom of religion,” said MK Nitzan Horowitz (Meretz), who led the list of legislators behind the initiative. “There are currently hundreds of thousands of Israelis who are considered without religion, and cannot marry in Israel,” he said prior to the vote. “When the state was founded there was no such condition.”

“In the past decade 11 percent of the Israelis who married did so overseas,” Horowitz said, “of them – 75% Jews. You recognize these marriages,” he told Justice Minister Yaacov Neeman.

“Nothing at all would happen to Judaism if there would be freedom of choice in marriage,” Horowitz added.

Speaking on behalf of the government, Neeman, however, firmly rejected the bill, “which stands in contrast to the norm in Israel since the establishment of the state, according to which marriage and divorce in Israel will be according to Halacha.”

Neeman stressed the danger in a situation in which Jews who married according to Jewish law would be permitted to divorce without a rabbinical court. In such an instance, the woman would be prohibited by Halacha to remarry, and if she had children, they would be considered bastards. The minister also noted that this government legislated the Civil Union Law, which provides Israelis who have no religious status to marry in Israel. Since utilizing that option would entail that both partners have that specific religious status, only a handful of couples have used it since it passed a few months ago.

“This bill is an offense to the unity of the Jewish people, who have returned to their homeland after a two-thousand year diaspora,” said Neeman.

Taking the podium after the justice minister was MK Orit Zuaretz (Kadima), who attempted to speak wearing a white dress and veil on her head. She was forced to remove the veil. “This bill isn't against anything, rather aimed at expanding the current arrangement, alongside Judaism, to those who cannot marry according to Jewish law,” she said. “Some 3,500 Israelis marry in Cyprus each year; we need an alternative. This bill seeks to fix an anomaly.”

Nobody seemed surprised when 41 MKs objected the bill, with 16 supporting it.

Wednesday's vote is part of a larger campaign to enable freedom of choice in marriage, led by the Forum for Freedom in Marriage, Be Free Israel, the Israel Religious Action Center and Shatil, who earlier in the day and ahead of the vote held a conference in the Knesset, in which women supporters and lawmakers donned bridal garb, and the male MKs in their suits passed for casually dressed grooms.

The group, which has set its goals on “freeing Israeli citizens from the monopoly and coercion of the Chief Rabbinate on marriage and divorce,” has launched what it is describing as the largest campaign ever to deal with this issue, in at least a year of activity, funded by the New Israel Fund. Horowitz, who along with Zuaretz leads the Forum for Freedom in Marriage, also noted in his plenum speech that they would be turning to the High Court of Justice.

Ahead of the Wednesday event and vote, the NGO Hiddush: For Religious Freedom and Equality released a study they commissioned, according to which two thirds of the Jewish population in Israel was in favor of enabling civil marriage in Israel, though only one third would marry in such a ceremony, were it an option.