On Thursday nights during the summer, thousands of Orthodox Jewish men transform an ordinary Thruway rest stop into a sacred space. 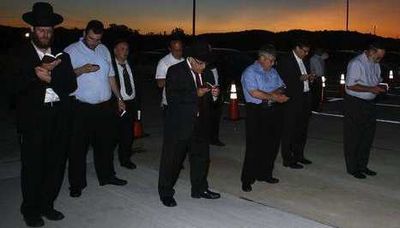 SLOATSBURG — On Thursday nights during the summer, thousands of Orthodox Jewish men transform an ordinary Thruway rest stop into a sacred space.

The travelers, who hail from Brooklyn, Staten Island and northern New Jersey, look for a place to pray as they make their way upstate to meet their families.

For nearly two decades, the New York State Thruway Authority has provided a place for religious Jews — as well as those of other faiths — to worship at the Sloatsburg travel plaza along the northbound Thruway, past Exit 15A, due to public safety concerns.

The prayer zone is on the top level of the rest area's two-story parking garage, far from the highway's breakdown lanes where men once gathered.

Rabbi Joel Friedman of Williamsburg in Brooklyn said Sloatsburg is well-known among religious Jews in New York City. The travel plaza is referred to as the "prayer stop" or the "meeting area."

Many Orthodox Jewish women and their children spend their summers in the Catskills to escape New York City's oppressive heat. The men continue to work in the boroughs during July and August, but on Thursday nights, they make the four-hour drive to Ulster, Greene and Sullivan counties.

As many as 300 Jews say their afternoon (mincha) and night (maariv) prayers there each Thursday, Friedman said. The busiest time is between 9:30 and 11 p.m., when up to 70 men in small groups pray together. That window of time lets them say both prayers within a short period before continuing on their journey.

"They stop for one prayer before sundown, and they wait a few minutes so they can (say) another prayer after sundown," he said.

Friedman spends each Thursday in the summer supervising the proceedings from 4 p.m. to midnight. As a liaison with the Thruway Authority, he makes sure things run smoothly, worshippers pray in the right location and people don't tie up traffic.

"A little bit, sometimes people still park on the ramp," said Friedman, who tells them there is designated parking on the second floor of the garage. "That's even easier. I keep explaining, 'Why walk?'"

Friedman took over for his father, Rabbi Morton Friedman, who died in 2009.

Over the years, Jewish community leaders and officials from the Thruway Authority and state police have worked together to ensure travel is not disrupted and motorists are safe.

Betsy Feldstein, a spokeswoman for the Thruway Authority, said a prayer zone was created in 1993 after officials began to observe that groups of Jewish men were parking their cars on the shoulder of the highway just beyond the Harriman toll plaza in Orange County. They would wave down other cars since they needed to pray for about 20 minutes in groups of at least 10 men.

"As they prayed, their children often played on the side of the Thruway," Feldstein wrote in an email.

Temporary meeting areas were set up off the Thruway, including at a nearby tandem truck stop, while a long-term solution was developed, Feldstein said. That came when the Sloatsburg travel plaza was renovated, and an area was set aside to let motorists "safely rest, gather and pray."

Minor problems have occurred at the prayer zone over the years, like people selling raffle tickets, some people loitering and food being served — though that's less of an issue now that the rest area has a vending machine offering kosher food.

"People sometimes are still upset that they cannot do their business," Friedman said. "I keep telling them that this is not a place for business but for prayer."

Robert Woodill, who took over as manager of the Sloatsburg and Ardsley travel plazas late last month, said the garage has been effective. It's underused, and it moves the worshippers' vehicles away from traffic heading to the gas station, food court and restrooms, he said.

Though Thruway officials were unaware of any other religious groups using the prayer zone, Friedman said he recently has seen Muslims worshipping there.

Rabbi David Eidensohn of Monsey said many Jews were deeply appreciative of the accommodation the state made for people of faith.

"God bless America," he said. "They make special places for us to pray."

Posted at 05:07 AM in Haredim, Religion, Religion & State | Permalink

On Thursday nights during the summer, thousands of Orthodox Jewish men transform an ordinary Thruway rest stop into a sacred space.