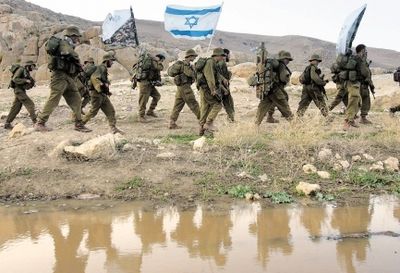 In landmark deal, Chabad men to enlist in IDF
Historic agreement expected to be signed between Israeli military and Chabad leaders • Graduating yeshiva students to study abroad for a year, then return for full military service.
Yehuda Shlezinger • Israel HaYom

Leaders of the Chabad-Lubavitch ultra-Orthodox movement have brokered an agreement with the Israel Defense Forces to draft male members for full military service. The agreement is to be signed soon, both sides report. The move marks the first time an entire Orthodox Hasidic movement will commit itself to sending its members to the Israeli military.

The agreement between Chabad and the IDF, which comes after several months of negotiations, allows Chabad yeshiva students to leave the country for one year at the completion of their religious studies. After their year abroad, the students will be required to return to Israel for regular military service of three years.

The agreement stipulates that the men will be drafted and will have to serve a full three-year term even if they were married before beginning their service.

The Chabad-Lubavitch movement was founded in Russia in the late 18th century and established its headquarters in Crown Heights, Brooklyn, in the 1940s. Under its seventh rebbe, Rabbi Menachem Mendel Schneerson, it became a powerful force within modern Judaism. Schneerson died in 1994 and no successor has since been named.

Israeli Chabad students traditionally traveled to New York to spend up to a year with the community upon the completion of their yeshiva studies, when secular high-school graduates usually begin their compulsory military service. The IDF allows certain exemptions for those who study Torah as their main occupation, but after Schneerson died, the IDF notified Chabad that its students were not covered by the exemption and no longer had permission to leave the country.

Chabad leaders believe the year in New York is an important aspect of a yeshiva student's education, and did not accept the IDF's change. Many Chabad students continued to travel to New York and were labeled deserters. The new agreement with the IDF will allow Chabad students to continue their traditional year abroad if they agree to return at the end for full military service.

Chabad leaders have downplayed the importance of the new pact. “The agreement does not stipulate that if you are religious, you don't have to do IDF service,” one Chabad leader said. “The exemption is only while you are in yeshiva. Most members of Chabad do not attend kolels [religious study institutions for married men] through their 30s and 40s -- they only study in their 20s, and they generally have jobs and join the IDF.”

Chabad is concerned about fallout from other ultra-Orthodox groups because of the agreement, said a source with knowledge of the agreement. The IDF, on the other hand, is satisfied, considering the agreement a significant achievement after years of trying to integrate ultra-Orthodox communities into greater Israeli society, and is looking forward to the official support of some of Israel's most highly respected rabbis and Haredi community leaders. “This sets a precedent in the Haredi world,” the source said of the agreement. “For the first time, rabbis will support an agreement that will significantly increase the numbers in the IDF's ranks.”

An official statement from the IDF Spokesperson's Unit also downplayed the agreement's significance. “IDF representatives constantly meet with relevant people in efforts to increase the numbers of those who are drafted. There is nothing new in the report,” the statement said.

As ZIY notes in the comments below, the article from Israel HaYom appears to be overblown:

This story is somewhat overblown. From the article it is clear that that they are specifically referring to the group of 19-20 year old Israelis who spend a year studying in 770. This is referred to as "Kevutzah," and has been going on since the early 1960s.

At its height, this group does not exceed 100+ students who are selected with the honor to travel to NY ("Beis Chayaynu") from the various Chabad Yeshivos in Israel (Tzefas, Migdal Ha'emek, Kfar Chabad, Toras Emes, etc.). This is NOT a mandatory program for ALL Israeli Chabad bochurim. (Incidentally, the Kevutzah students are overwhelmingly Meshichistn, especially those from Tsfas, & are known to be the most active Messianists in 770.)

So until it is clear that this applies to ALL Israeli students, including those who do not travel to 770, this should be read as Chabad's real-politik practical way out for the Kevutzah program to continue, rather than being an ideologically driven change of Chabad policy.

Update 1:05 pm 8-1-11 – ZIY notes that Chabad rabbis have now issued a statement saying that there is no deal with the IDF and any claim that there is one is false:

"In response to the announcement in the general newspapers that defames the name of Chabad Chasidut, we here with make it known that we never negotiated nor did we ever give our consent (approbation), heaven forfend, to the drafting of Yeshivah students.

"As part of the Torah world, our position is clear and explicit, that a God-fearing bachur is to be exclusively found in the "four cubits of halachah," (i.e.) only within the walls of the sacred Yeshivot."