« New Square Arsonist Due In Court Today – Will There Be Justice? | Main | $1.5 Million Dollars Of Pot Seized In Kiryas Joel »

And The Schick Spills Forth Again

Orthodox apologist Marvin Schick attacks The Jewish Week for its reporting of the Leiby Kletzky murder. 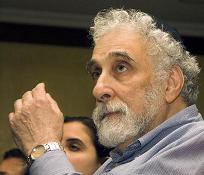 "As the Kletzky family began the shiva period and Jews everywhere joined in their mourning, and as millions of persons who are not Jewish felt the pain, there was one notable exception to the universal grief over the murder of young Leiby. That exception was the Jewish Week of New York, a community newspaper that over the years has specialized in targeting Orthodox Jews, depicting us as engulfed in wrongdoing, notably of a financial or sexual nature."

So begins a blog post by Marvin Schick, a man who has spent much of the waning years of his life explaining to anyone who will listen that Orthodoxy in all its forms is good, pure, wholesome and right, and that all who expose its flaws are evil bigots.

In Schick's world, there are no shades of gray. You're with him or against him, pro-Orthodoxy or anti-, a good person or a bigot.

Those assertions are foolish and bigoted. They're not supported by statistical or anecdotal evidence. But that doesn't stop Schick from making them.

At the same time, Schick is quick to attack academics and journalists who do cite evidence. Their studies or reports are always "biased" and written out of "animus" for Orthodoxy.

Sometimes, when name-calling won't suffice, Schick will point out that there are far more [fill in whatever crime or aberrant behavior you want] in the non-Orthodox Jewish community or in the Christian or Muslim communities than there are in Orthodoxy. More Catholic priests have molested children than Orthodox rabbis, Schick might write, hoping you are oblivious to the fact that there are many more Catholics than there are Orthodox Jews, and that when that demographic difference is factored in, Schick's rhetorical advantage crumbles.

He also writes straight-faced about particular areas of crime, never mentioning his own Orthodox family members were indicted and convicted of those same or closely related crimes. It is as if he believes we won't notice, and therefore the crimes do not really exist.

So, what is it about The Jewish Week's coverage of the Kletzky murder that so distresses Marvin?

It isn't Ari Goldman's column or Jonathan Mark's hauntingly beautiful column about the murder, and it isn't the first report The Jewish Week carried about a missing 8-year-old child or its report of the murder – all of which were nothing but deferential to Orthodoxy.

What has Schick's mind in a knot is The Jewish Week's exposé on Shomrim, written by Hella Winston.

I will not defend Shomrim, because to do so would inadvertently give credence to Winston’s nastiness and it would cloud the critical point that the negative focus on Shomrim and the Orthodox is unacceptable journalism. Instead of praising Shomrim for the good it does and the role it played in this sad episode, Winston uses it as another launching pad for an attack against the Orthodox, treating us to a vile exercise in group libel. She writes “Strictly Orthodox communities have a long history of not reporting crimes – and in particular, sexual crimes against children – to the secular authorities, preferring to police their own.”

In other words, Schick believes it is unacceptable to write that, “strictly Orthodox communities have a long history of not reporting crimes – and in particular, sexual crimes against children – to the secular authorities, preferring to police their own” – even though the head of Borough Park's Shomrim himself admits that many rabbis tell their followers not to report those crimes to police.

That beat cops and detectives and sex crime cops and many Shomrim members all say the same thing is of no concern to Schick, just as it is no concern to Schick that America's leading ultra-Orthodox rabbis have said clearly and publicly that most cases of suspected child sexual abuse, elder abuse, etc., must be brought to rabbis, not cops – a clear (if unintended) affirmation of Winston's point, reissued during the search for Leiby Kletzky, no less, and clarified near the end of his shiva by Agudath Israel of America, the ultra-Orthodox umbrella group.
But Schick is even more angered by the idea that Leiby Kletzky may have known his killer:

There was one paragraph that goes beyond the bounds of ordinary odiousness. I cannot fathom how the Jewish Week allowed it to be published. It reads: “A law enforcement source with knowledge of the case told the Jewish Week that there is ‘reason to believe,’ based on the video footage of Aron and Leiby last Monday, that this was not, as the NYPD has publicly claimed, an abduction by a stranger, and that the two may have been acquainted prior to the tragic encounter.”

This is sick and despicable.…

Pedophiles and those who abduct and murder children often groom their targets. A pedophile can spend weeks befriending a small child before he takes that "friendship" into sodomy, rape and molestation.

This isn't conjecture – it is an undisputed fact taught in universities and police academies across the world.

So why is the mention of it so "odious," so "sick and despicable" to Schick?

I think Schick views pedophilia as crime "good" kids resist. They run screaming from their attackers and finger the evil non-Orthodox pedophiles to the police. They don't come back for another candy bar or for another hour playing video games their parents won't buy.

That's because everything is black and white in Schick's world. Kids are either good or bad. And kids who fall prey to pedophiles can only be good if they are snatched by a stranger who sexually abuses them, suffocates them, cuts them into pieces, and dumps them in a garbage bin, keeping their feet in ziplock bags in a freezer for reasons only a depraved (and non-Orthodox) mind can understand.

But a hasidic kid who may have met his potential abuser for ice cream or to play video games, and an abuser who prayed three times each day and ate kosher, turns Schick's fantasy world upside down.

Schick is really fighting a sad and lonely fight against his own inner demons, a fight against his own cognitive dissonance, against the realization that pedophiles lurk in mikvas and yeshivas, that the philanthropist who sits next to him in shul could be the next Joseph Shereshevsky or David Schick, and that the rabbi who covers up for him might be Schick's own.

Marvin Schick is tilting at his own windmills, as the sun sets on his world of make believe.

The Jewish Week:Tragedy In Borough Park Puts Shomrim Under Scrutiny.

And The Schick Spills Forth Again

Orthodox apologist Marvin Schick attacks The Jewish Week for its reporting of the Leiby Kletzky murder.