Female protagonists in news stories are converted by ultra-Orthodox media to males in a gynophobic, misogynist attempt to remove women from public life.

Charedim and Women
The Di Tzeitung saga brought some attention in the outside world to the Charedi way of life. We saw with bemusement how reporters try to grapple the whole dynamic of the complex Charedi behavior towards women, without avail. Because of the lack of understanding, some, like the Jerusalem Post, claimed that Hillary Clinton was photoshopped of the situation room photo because Charedim have “strong feelings that women should not be in positions of power,” a claim that is not really true (at least in the case of non-Jewish politicians).

But the media did not understand the real issue going on in Charedi communities; namely the ongoing proliferation of sex-related bans, and an escalation of gynophobia, culminating in extremely perverted behavior. To be clear, the policy of not publishing photos of women is not new; it has been going on for many decades now. But the sickening attitude towards women is evident in the new policies that gain more and more support.

In the past few years, Charedi newspapers adopted a new policy not to publish first names of living women; in most cases they are mentioned as “the wife of Mr. So-and-so,” or only by their initials. Dead women are exempted from this policy, perhaps necrophiliac askonim have yet to gain a stronghold.

Lately, we have seen a new phenomenon, and that is the attempt to transgenderize women whenever possible, turning them into males. This is done on a daily basis in the printed and broadcasting media.

When actress Natasha Richardson passed away following a head injury sustained when she fell during a skiing lesson, it made worldwide headlines. The Yiddish newspaper Der Blatt reported the story not indicating that Ms. Richardson was an actress and... turning her into a male! As crazy as it seems, the whole story referred to her as “he” and “him”. The Chasidic news phone line Kol Mevaser (212-444-1100) turns females into males on a daily basis. For instance, the recent story about a woman that woke up from a dental surgery with a foreign accent (http://news.google.com/news/search?aq=f&pz=1&cf=all&ned=us&hl=en&q=dental+surgery+foreign+accent) was reported this week on Kol Mevaser that it happened to a man!

Last week, a story was widely reported in the media about Lakeysha Beard, a woman who was charged with disorderly conduct for talking on her cellphone for 16 hours in the designated quiet car of an Amtrak train. (http://news.google.com/news/search?aq=f&pz=1&cf=all&ned=us&hl=en&q=Lakeysha+Beard&btnmeta_news_search=Search+News)
This story was reported in the largest and most mainstream Chasidic Yiddish newspaper as well. But as you can see in the attachment [posted below], Der Blatt neatly transgendered Ms. Beard, and turned her into a male!

Here is a translation of the report in Der Blatt. (Please note that the definite article, nouns and adjectives are used in Yiddish differently, depending on the gender. I indicated on the words that take a masculine format in the report, otherwise not discernible in a translation.)

Salem, North Carolina. – A train passenger (masculine) was removed from an Amtrak train by the police for agitating the passengers by talking on the cellphone for 16 hours without stop.

The (masculine)removed (masculine) passenger later said that he felt embarrassed and that he was not respected, and he does not understand what was wanted from him.

The story occurred on an Amtrak train ride from California to Washington D.C., when the (masculine) passenger (masculine) who (masculine) sat in one of the designated “quite cars” – where it is not permitted to talk on the cellphone –spoke on his cellphone continuously, despite the pleads of the other passengers to be quite.

The train was stopped in Salem, North Carolina, where police was called, who removed the (masculine) agitating (masculine) passenger (masculine) from the train. 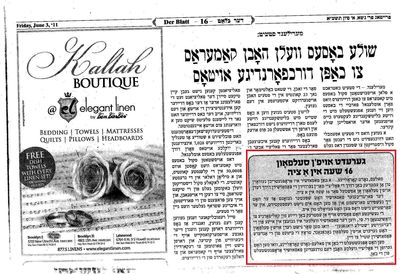 Female protagonists in news stories are converted by ultra-Orthodox media to males in a gynophobic, misogynist attempt to remove women from public life.