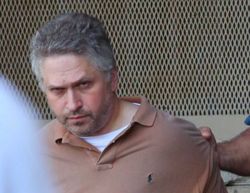 The treasurer of a Woodmere synagogue was arrested at an airport hotel early Wednesday and charged with stealing more than $600,000 from the Jewish house of prayer, police said.

Isaac Zucker, 47, of Westwood Road, Woodmere , is scheduled to be arraigned Wednesday in First District Court, Hempstead , on a first-degree larceny charge.

He was arrested at 1:55 a.m. at the Holiday Inn at Long Island -MacArthur Airport

As treasurer, police said, Zucker transferred more than $600,000 into his personal bank accounts. He was confronted last week by members of the congregation, police said, and then suddenly went missing.…

After being called "a substantial flight risk," the treasurer of a Woodmere synagogue who was arrested at an area airport hotel Wednesday pleaded not guilty to charges he stole more than $600,000 from the Jewish house of prayer.

…The shul, which serves 250 families, has a mortgage with First Republic Bank. Until four months ago, Ganz said, the shul had never been late on a payment.

“We raised about $225,000 over the weekend, so we’ve been able to pay the bank anything that was in arrears,” Ganz said. “Either we are or we will be current on all bills by the end of the week, and I think we have a bit of a reserve to get us through the normal fundraising schedule. … but it’s a very significant loss.”

…The shul also hired a forensic accountant and traced the fraud’s origin back to 2008. Each board member is elected to a three-year term, and Zucker is believed to have started in 2006 and re-elected in 2009.

The shul maintained two accounts, one for operating expenses at a local bank and an endowment fund at TD Bank. Zucker deposited checks made out to the expense account into the endowment fund, which he then was able to sweep into his own account, according to shul officials.

“Until very recently bills got paid on time, so there was no reason to suspect that anything was going on,” said Ganz. “He [Zucker] got sloppy.”

Jennifer Morneau, Public Relations Manager for TD Bank, said they were unaware of the situation.…

Gavriel Fagin, an adjunct professor at the Wurzweiler School of Social Work and a member of the shul, said he was in “total denial” when he first heard the news.

“On a shul level, how could someone betray our trust in such a manner?” Fagin said. “But more deeply, on a personal level, this hurts so much. There is anger. I can’t help but feel sorry for him. I truly hope he gets the help he needs to recognize the destruction, and to begin to take steps to repair the shattered pieces.”

Fagin said the congregation considered Zucker’s family “the biggest victims here. Our hope is that Isaac’s wife, father, in-laws and, most of all, children can still come and feel comfortable in Aish. We love them, accept them, will be present for them and hope that they can find peace of mind among familiar faces.”