Hundreds of right-wing activists attempted to storm the Supreme Court yesterday to protest the detention of Kiryat Arba Chief Rabbi Dov Lior earlier in the day. Protesters also blocked the entrance to Jerusalem and other streets in the capital. 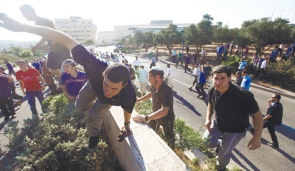 Hundreds of right-wing activists attempted to storm the Supreme Court yesterday to protest the detention of Kiryat Arba Chief Rabbi Dov Lior earlier in the day.

Protesters also blocked the entrance to Jerusalem and other streets in the capital.

Lior was wanted for questioning after he endorsed the controversial book "Torat Hamelech," which justifies the killing of non-Jews.

In an unusual step, Israel's two chief rabbis, Yona Metzger and Shlomo Amar, yesterday released a joint statement decrying "the severe damage to the dignity of an important rabbi and rabbinic judge, one of Israel's greatest rabbis." However, they also called on people not to protest the police's questioning of Lior.

Police launched their incitement investigation after "Torat Hamelech" was published. The book's author, Rabbi Yitzhak Shapira, was detained, questioned and released. An endorsement by three more senior rabbis was appended to it, which is a standard procedure for Torah-related books by young rabbis.

One of the other rabbis who endorsed the book, Rabbi Yosef Ginsburg, was investigated a year ago. Lior and the third rabbi, Rabbi Yaakov Yosef, refused to come in for questioning.

Police said yesterday they would not need to question Lior again, and they would complete their investigation after they questioned Yosef.

An arrest warrant has been issued against Yosef.

The police will pass Lior's file on to the State Prosecutor's Office, which will recommend whether to indict the rabbis. Considering the sensitive nature of the issue, the final decision would be made by Attorney General Yehuda Weinstein.

According to a report on Channel 2 yesterday, the police are inclined to recommend indicting the rabbis and the book's author for incitement to racism or violence.

Police said they stopped Lior's car near the tunnel at the southern entrance to Jerusalem. A policeman replaced Lior's driver and drove the rabbi to the offices of the Serious and International Crimes Division in Lod, where he was questioned for about an hour in an amicable atmosphere.

Yesterday's protest in front of the Supreme Court was organized by the Yesha Council of settlements and other groups that usually are not on good terms with each other.

About 300 protesters also blocked the entrance to Nablus at the Hawara roadblock.

Seventeen protesters were arrested in Jerusalem, two of whom were attempting to break into the home of deputy state prosecutor Shai Nitzan.

Nitzan, who is currently abroad, has been given special police protection after he was threatened by right-wing extremists.

The director of the right-wing Legal Forum for the Land of Israel, Nachi Eyal, called the arrest an "eclipse in the Justice Ministry" and "unwise." He said rabbis should have the same freedom of speech as university lecturers.

The chairman of the National Union Knesset faction, MK Yaakov Katz, yesterday called on all yeshiva heads to have their students demonstrate at the Jerusalem police station at the Russian Compound.

The legal adviser to the Association for Civil Rights in Israel, Dan Yakir, said police were within their rights to "bring in a suspect for questioning at a police station after he repeatedly refused to appear for questioning." However, Yakir also said extreme care must be taken in launching an investigation against a person for an "offense of expression." Nevertheless, if there was suspicion of incitement to violence or racism, such an investigation was justified, Yakir said.

The Jerusalem Post has video of one of the demonstrations, where you can see Dov Lior held aloft on the shoulders of demonstrators. It also notes police are on high alert, fearful there will be more demonstrations today.

The Post also has a quote from opposition leader Tzipi Livni that cuts to the heart of the matter, and where she notes Netanyahu has not spoken in support of police or against the violence:

Opposition leader Tzipi Livni on Tuesday addressed an assembly of the Jewish Agency Board of Trustees, commenting on the arrest Monday of Kiryat Arba Chief Rabbi Dov Lior and saying that the arrest has sparked a debate on the source of authority in the country, "the judge or the rabbi."

Livni said Israel must maintain itself as a state where the law rules and everyone is equal before the law.

The opposition leader also criticized Netanyahu saying that he was "silent" on the issue, and that he has not protected Justice Ministry officials who are working to protect the law in the country and who face external incitement.

She added that Israelis, both on the Left and the Right, should oppose this incitement, and support Israel as a country in which everyone, including rabbis, are subject to the law.

Here's how Ha'aretz has Livni's quotes:

…Earlier on Tuesday, opposition leader Tzipi Livni attacked Prime Minister Benjamin Netanyahu for not supporting law enforcement and justice officials. "How do you not defend the officials in the Justice Ministry who are working to uphold the law, while there is severe incitement against them from the outside?" Livni asked.

"No one likes to see a rabbi arrested, including me," Livni said. "And I also don't like to see a prime minister under investigation or a president going to prison, but Israel must maintain itself as a law-abiding country where everyone is equal before the law."

Hundreds of right-wing activists attempted to storm the Supreme Court yesterday to protest the detention of Kiryat Arba Chief Rabbi Dov Lior earlier in the day. Protesters also blocked the entrance to Jerusalem and other streets in the capital.