Body shop owner Berger and his employee Greenberger allegedly inflated the amount of damage done to cars and overbilled GEICO. $700,000 in cash was recovered from Berger's home. 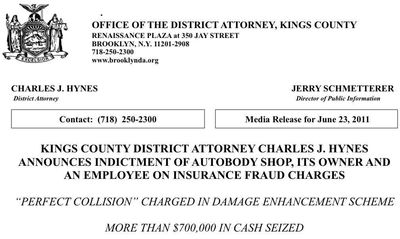 In the indictment announced today, the defendants are charged with submitting inflated bills for repairs to a car insured by Geico, but prosecutors believe additional insurance companies and carriers may have been victimized as well. The investigation is continuing.

“These crooks thought they had found the ‘Perfect’ crime, but my Detective Investigators quickly put the brakes on, preventing another bogus collision.” said District Attorney Hynes. “Auto-insurance fraud costs Brooklyn residents hundreds of thousands of dollars each year in increased premiums, and my office will prosecute all such crimes to the fullest extent of the law. I would like to thank Geico, Esurance, and the National Insurance Crimes Bureau for their assistance in this investigation.”

To investigate Geico’s suspicion about Perfect Collision, KCDA Detective Investigators damaged a car’s front passenger-side fender, photographed the damage and brought the car to Perfect Collision. The indictment charges that Hershy Greenberger assured an undercover Detective Investigator that Geico would cover all the repair costs. When a Geico claims adjuster arrived to photograph the damage, it had been “enhanced”, according to the indictment, with another dent in the same fender and other damage. Greenberger and Berger are charged with making the additional damage to increase the bill and fraudulently charge Geico for the repairs. Perfect Collision is also charged with billing Geico more than $1,000 for a rental car, in an undercover’s name, even though the undercover told Greenberger that he did not want a rental car for the week of the repairs.

While another Geico claims adjuster was at Perfect Collision to photograph another car car, he happened to spot a minivan he had been assigned to photograph for the company the following day. Without notifying Perfect Collision, he took pictures of the minivan, which had little to no damage. The following day, when he returned to take official photographs for Geico’s records, there was new, extensive damage to the fender, driver side door and other areas, according to the indictment.

Detective Investigators executing search warrants on Perfect Collision and Berger’s home recovered more than $700,000 in cash, a 2011 application for public assistance claiming Berger earned $350 per week as an employee of Perfect Collision, and business records. Evidence recovered in the searches will be used to investigate other crimes the defendants may have committed, including insurance fraud and welfare fraud. The investigation is continuing.

An indictment is an accusatory instrument and not proof of a defendant’s guilt.

Body shop owner Berger and his employee Greenberger allegedly inflated the amount of damage done to cars and overbilled GEICO. $700,000 in cash was recovered from Berger's home.