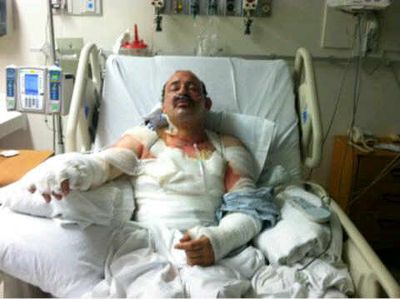 …Rottenberg, a 43-year-old plumber and father of four, is improving, his son-in-law Moshe Elbaum said Thursday.

Elbaum said Rottenberg couldn't complete the sale of his house because of interference. Fromowitz was able to sell his Stern Avenue home, although he said the religious leadership tried to kill the sale.

Hank Sheinkopf, a public relations consultant, said his New Square clients counter that there was no effort to force anyone to move out of the community.

"No such efforts have been sanctioned by the leadership of the community," Sheinkopf said. "There was no blocking any sales of houses. Every attempt has been made to assist, not to block sales.

Sheinkopf said two of the rabbi's sons wanted to visit Rottenberg in the hospital and were awaiting family approval. Elbaum said Rottenberg was not interested in seeing them.

Meanwhile, declaring, "I am not a fighter," [fellow New Square dissident David] Fromowitz said Thursday that he had enough of his family being harassed, his property vandalized and his children denied an education by the village's religious leadership. He, his wife and their five children moved to Monsey.

Fromowitz, 33, born and raised in the Skver Hasidic village, considered himself a model citizen, having donated more than $100,000 to the grand rebbe and community members over the years. His family lived in the village, formed in 1954, for more than 50 years.

"A lot of people don't have the strength to move out of here," said Fromowitz, who works in real estate. "I gave them money even after they terrorized me and my family. I am a man of peace and put my hopes in God.”…

You can read the entire article on the Journal News.