Nothing about romantic relationships, no pictures of girls over the age of five, and a censor supervising content – this is what new haredi lifestyle magazine Stylish looks like

Introducing 'Vogue' with sleeves
Nothing about romantic relationships, no pictures of girls over the age of five, and a censor supervising content – this is what new haredi lifestyle magazine Stylish looks like
Tzofia Hirschfeld • Ynet 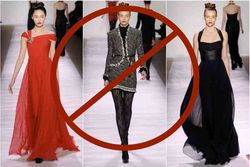 Ultra-Orthodox women don't usually stop by newspaper stands and pick up a magazine. This is probably due to the fact that they hardly possess any reading material of a light, feminine nature.

They don't have a subscription to Vogue and most of the reading material addressed to them is related to family or health issues. Very little of it deals with them.

But is seems the feminine newspaper shelf in the haredi sector is beginning to fill up – and one of the prominent representatives on it is Stylish, a kosher lifestyle magazine.

"Even haredi women have a few minutes a day in which they want to spend time alone and read something which is not news," says Stylish Manager Hani Dobkin.

"The problem is that the haredi media are very informative, and the content of other women's magazines are irrelevant to haredi women – both because of modesty issues and because what happens to a secular girl is different from a haredi girl's world."

"The situation several years ago was that haredi women didn't have anything to read. The religious-national sector does, seculars do, but we cannot bring these newspapers into our houses because they include models.

"We wanted to create a newspaper for haredi women which would be fun, which would allow them to sit quietly with themselves and detach themselves from everything else. Since such a magazine was missing, we founded one."

Stylish's first prototype was published four years ago. It was distributed for free and was designed for both men and women – mainly from the top echelon. A focus group conducted four years later led to the conclusion that a change of direction was needed.

The new result is a haredi lifestyle magazine for women of 150 chromo pages, designed for the middle class with fewer Louis Vuitton bags.

"We discovered that the top echelon doesn't need us, they have their own newspapers," says Dobkin. "Since the middle class cannot be given Prada dresses, we changed the fashion productions so that 90% of the clothes are relevant for most readers and only 10% are top echelon clothes, because people still like to see things that are a bit beyond their reach."

Dobkin says that when the newspaper was founded there was no culture of magazine consumption among women in the haredi public, and it was not easy breaking ground.

"Another thing we dealt with was the fact that we didn't have a role model," she says. "We built everything from scratch – a magazine dealing with fashion and leisure."

But most women's newspapers deal with that too.

"But the haredi public is different. Our daily life is different and our needs are different. There are large families in the haredi society, and they hardly go to cultural performances, so the recreational activities' money is directed at home design and other needs.

"Moreover, fashion productions for haredim cannot be with models – and that's a problem. So we have to be very creative.

"We try to combine expensive and cheap, elegant and strict, in every fashion production – because as opposed to the secular society, in which the rich live in Savyon and Kfar Shmaryahu and the less wealthy live elsewhere, in our sector everyone lives together, poor and rich, and everyone meets each other."

The fashion presented by Stylish takes into account the recreational culture in the haredi sector. Haredim go out a lot: Mainly to family events. The ultra-Orthodox society is filled with festive events like weddings and bar mitzvahs.

"Recreation in the haredi sector is the family events," Dobkin agrees, "and that's where they invest most of the money. There are weddings, engagement parties, circumcision ceremonies, bar mitzvahs. Entertaining is also important. They host meals on Shabbat and holidays, so the entire issue of designing tables is very interesting.


"Focus groups we've conducted have revealed that they are also interested in success stories of other haredi women. In the haredi sector the 'wisdom measure' is not valued according to one's academic degree but according to life experience, and thus the best advertising is by word of mouth."

Do you have a censor?

"Yes. Although we don't belong to any faction, the paper is inspected by several people I don't wish to name. We do it because we don't want to take all the responsibility.

"Besides, all of us come from the haredi sector, so we naturally have red lines. We won't write about relationships and we definitely won't discuss bedroom issues. We won't take photos of girls over the age of five. In the home design section, we'll always present a classic look.

"Since the magazine enters a haredi home, it's our responsibility to produce a newspaper which can be placed on the table openly."

Nothing about romantic relationships, no pictures of girls over the age of five, and a censor supervising content – this is what new haredi lifestyle magazine Stylish looks like