UPDATED: The Skvere Rebbe Speaks Again – But Is He Telling The Truth?

If by telling the truth we mean that his words are both accurate and presented in proper context, the answer would seem to be… 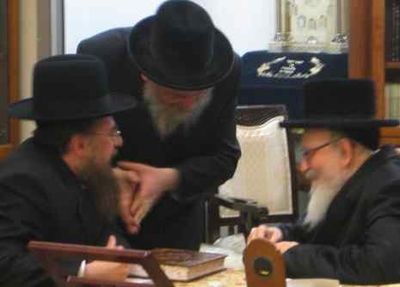 The Skvere Rebbe spoke with Ami Magazine, an ultra-Orthodox magazine based in Brooklyn. It's publisher, Rabbi Yitzchok Frankfurter, recently claimed on Zev Brenner's national radio show that his publications do not crop images or alter images. Yet, in that week's Ami publication for kids, Hillary Clinton was cropped out of that iconic picture of the White House situation room during the Osama Bin Laden hit. So much for Frankfurter's honesty.

VIN has this brief excerpt of the interview, which has not yet been published. In it the Skvere Rebbe says:

“I condemn in the strongest possible terms any violence or coercion under any circumstances.  The use of force violates the very precepts upon which this community was founded. My father was willing to sacrifice his life for peace.  I have tried to instill this trait in the entire community.  This is a sad episode for all of us.  We must also pray for the speedy recovery of all those hurt in this incident.”

Note that, in this excerpt at least, the Rebbe still fails to mention Aron Rottenberg by name, and equates Rottenberg – who lies in a hospital bed fighting for his life with third degree burns over half his body – with his injured attacker.

Also note that Rabbi Frankfurter does not appear to have pressed the Rebbe on that issue or on the indisputable fact that large amounts of violence had been directed at Rottenberg and other New Square dissidents in the year or two leading up to the attempted murder/arson, and there is no record of David Twersky, the Rebbe of Skvere, doing anything to stop that violence.

Indeed, posted on this site is a November letter from New Square's rabbinic leadership incouraging intimidation of a dissident and the shunning of his family. No such public letter could have ben issued without the Rebbe's approval

So the Rebbe is fudging the truth.

Frankfurter, being what he is, isn't content to let the Rebbe's untruths stand – he has to add more untruths of his own:

“This is a peaceful, loving, selfless community,” said Rabbi Frankfurter in an exclusive interview with VIN News.  “This is a terrible episode and no one in the community is condoning what happened here.  We have to put a stop to this. Jews of all stripes have to start living together in harmony.”

This "peaceful, loving, selfless community" spawned people who hurled rocks through people's windows, broke car windows, made threats against dissidents, harassed them and shunned them – all because a few dissidents chose to pray outside the community.

Children and wives of dissidents were harassed – even little children.

And for at least two years, David Twersky and the rest of New Square's leadership did nothing about it.

So we have lies from the Skvere Rebbe, from Frankfurter and from VIN, which shamelessly printed these lies unchallenged.

That is the lowly state of what passes for ultra-Orthodox news reporting.

Update 6:19 am CST – Zev Brenner had Ami Magazine's publisher Rabbi Yitzchok Frankfurter on his radio show last night as the only guest to talk about Ami's exclusive interview wit the Skvere Rebbe.

Frankfurter claimed that he is not doing public relations for the Rebbe.

He repeatedly admitted that he is not familiar with many of the details of the violence against New Square dissidents. Those details – including the basic fact that years of violence against dissidents culminated in the horrific attack against Aron Rottenberg and family – were not mentioned in his interview with the Rebbe.

The Rebbe's failure to condemn these many violent acts against dissidents was not mentioned.

The Rebbe's initial failure to condemn the horrific arson attack against Rottenbergs an dhis inability to mention Rottenberg by name or do anything to help the Rottenberg family recover was not mentioned.

And then Frankfurter praised the Skvere Rebbe repeatedly and at length.

Farnkfurter also blamed bloggers – especially one blogger he refused to name but who is clearly me – for using the horrific attack on the Rottenbergs to lead an attack against Jews and Judaism.

He also accused me of racism and antisemitism. Why? Because my blog focuses on Orthodox and ultra-Orthodox crime, and that in and of itself is racist. What if someone did that to Chinese or another minority, he asked? We'd all call him racist. And Zev Brenner appeared to agree.

In other words, reaching a well supported conclusion that your community's leadership is corrupt and that the community's bylaws too often serve to foster and cover up that corruption is not a form of racism or bigotry, and it is not a form of self-loathing or self-hate.

Here is the audio. Please click the gray bar to listen:

Update 6:47 pm CST – The "interview" with the Skvere Rebbe Frankfurter promoted turns out to be a PR piece. The enitre "interview" is a couple small paragraphs long. And the Rebbe's "condemnation" of the violence? It came in response to Frankfurter telling the Rebbe that people were out to destroy all that he has worked for and built because of the actions of one individual or a small group. The Rebbe responds with the brief 'condemnation' quoted above. That is the longest section of the interview.

UPDATED: The Skvere Rebbe Speaks Again – But Is He Telling The Truth?

If by telling the truth we mean that his words are both accurate and presented in proper context, the answer would seem to be…