The Abortionist Of Auschwitz

This woman aborted as many as 3,000 babies while she was a prisoner in Auschwitz. Is she a murderer or a hero?

To the Catholic Church and many Evangelicals, Dr. Gisella Perl was a murderer. 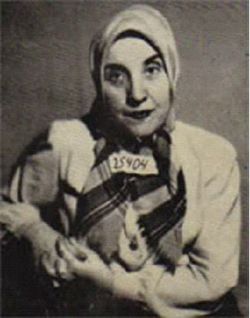 An Orthodox Jew who was the daughter of a rabbi, Dr. Perl worked as an obstetrician in Sighet, Romania, Elie Wiesel's hometown. After the Nazis took Romania, she was deported to Auschwitz with the rest of the town's Jews. Her family was murdered there.

Dr. Perl was put to work in the camp infirmary and was also made to work as a prisoner assistant to Dr. Josef Mengele, the monstrous Nazi doctor who, among other atrocities he committed, performed exceeding cruel and painful medical experiments on the retarded, handicapped, twins and pregnant women.

When these brutal experiments were completed, the surviving patients were sent to the gas chambers, where they were murdered.

Pregnant women not given to Mengele for his experiments were immediately tortured and murdered. According to Dr. Perl, pregnant women

“…were surrounded by a group of SS men and women, who amused themselves by giving these helpless creatures a taste of hell, after which death was a welcome friend…They were beaten with clubs and whips, torn by dogs, dragged around by their hair and kicked in the stomach with heavy German boots. Then, when they collapsed, they were thrown into the crematory - alive.”

Babies who were somehow born in Auschwitz were immediately murdered by camp guards.

For pregnant women to survive in Auschwitz they had to somehow conceal their pregnancies from these Nazis – a very risky proposition – or they had to abort.

While working for Mengele by day, at night Dr. Perl ran a secret medical practice for Auschwitz prisoners. Without any access to anesthesia, sterile wipes or even instruments, Dr. Perl stitched wounds, performed surgery and immobilized broken bones, saving hundreds of lives.

But there was one more thing Dr. Perl did.

To save the lives of pregnant women who would otherwise be tortured by Mengele and then murdered, Dr. Perl performed abortions – thousands of them.

Under Jewish law, these abortions were permitted and, in most cases, required.

Jewish law views the mother's life as primary and the life of the fetus as secondary. If a conflict between the two exisits – for example, carrying a pregnancy to full term endangers the mother's life, either from a medical condition or, in this case, from certain torture and murder – the fetus is viewed as a rodef, a pursuing agent which seeks to bring about the death of the mother.

Jewish law then allows – and, in most cases, mandates – abortion of that fetus.

For Jews, Dr. Gisella Perl was a woman dumped into a pit of horror who was forced to make choices we in our worst nightmares can't envision. And while not perfect, she gave thousands of slave prisoners, primarily Jews but Poles and Roma as well, the chance to live another day and, perhaps, survive.

But for pro-lifers, there is no moral ambiguity. Dr. Perl is a murderer.

Judaism views every abortion as a tragedy. But at the same time, it recognizes that there are times when it is unsafe for a woman to carry a pregnancy to full term. In those cases, Judaism allows and often mandates abortion.

That is why Judaism does not support the pro-life movement, and that is why the abortionist of Auschwitz was not a murderer.

Posted at 07:20 AM in History, Med-Ethics, Public Health | Permalink

The Abortionist Of Auschwitz

This woman aborted as many as 3,000 babies while she was a prisoner in Auschwitz. Is she a murderer or a hero?