Brooklyn social worker Gavriel Fagen may be called as a witness against Yosef Kolko, (pictured at right and below).

Yosef Kolko, a former teacher at Yeshiva Orchos Chaim in Lakewood who was also previously a counselor at Yachad summer camp, is accused of sexually abusing an 11-year-old boy from that summer camp. 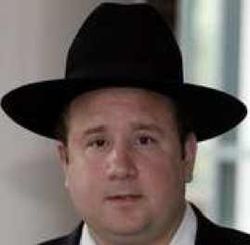 But before those charges were filed, the victim’s father took the sex abuse allegations to a Lakewood beit din (religious court). The beit din retained Brooklyn social worker Gavriel Fagen to interview Kolko and, based on that interview, to determine the legitimacy of the allegations against him.

During the interview with Fagen, Kolko was told that information Fagen gathered from the interview would be reported to the beit din. Kolko agreed and signed forms allowing that to happen.

The victim's father was then harassed by Kolko supporters, at least one of whom is now facing criminal charges for witness tampering as a result, and Lakewood rabbis issued a proclamation against the father, which in part read:

"And if, in fact, he has transgressed and has gone so far as to bring the matter to the secular (nonreligious) courts, he is, perforce, obligated to do everything possible in order to remove any scintilla of accusation against the other party from the secular courts. And it need not be stated that it is forbidden (for him) to continue to cooperate with them (secular courts) and to assist them in their efforts to pursue a Jew.''

"Such behavior (as that of the victim's father) wouldn't be tolerated'' elsewhere. "When your child tells you something, you don't go straight to a prosecutor, you go to a Bais Din and let them examine the (evidence).… "there's no evidence at all'' against Kolko.

The OU has yet to publicly distance itself from Belsky's remarks.

The prosecution in Kolko’s case wanted to call social worker Fagen as a witness at trial. Kolko’s attorney objected.

Yesterday, a judge ruled that Fagen may be called as a witness and, according to the Asbury Park Press noted:

“I think that it is not a small factor to be considered that (the Beis Din) is a parallel justice system ... within a closed community… I’m satisfied that during the course of the sessions, given that it was to be shared with other individuals, that the defendant sufficiently waived privilege.’’

At a hearing in March of this year, Fagen testified that Kolko spoke with him about the alleged abuse. “There were a lot of specifics," Fagen said.

Brooklyn social worker Gavriel Fagen may be called as a witness against Yosef Kolko, (pictured at right and below).