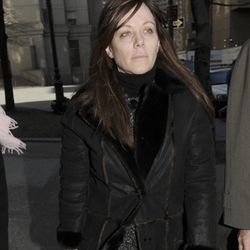 INDIANAPOLIS — A New York socialite pleaded guilty Thursday to a federal charge that she duped corporations out of millions of dollars.

Reis could have faced up to five years in prison, but an agreement with prosecutors would cap her possible sentence at no more than 31 months if the judge accepts the deal, which she is not obligated to do. The plea agreement also limits the financial penalties Reis might have to pay to $7 million.

Attorney J. Richard Kiefer asked Magnus-Stinson to ease travel restrictions under which Reis had been released on her own recognizance, so she could sell off art works and other items to raise the money to pay restitution. The judge declined to entirely lift the restrictions and said Reis would have to receive permission from her probation officers.

Reis, a well-known art collector in New York social circles, was accused of wining and dining corporate CEOS at her luxurious brownstone under the guise of a company looking for a new top executive. Then they were asked to provide discounted goods for distribution by a nonexistent network that supposedly provided products for use as samples at retail outlets or promotional packages for senior living communities and other special groups.

Instead, prosecutors said, Reis sold the goods for profit. Some of Reis’ employees, who also were charged, were alleged to have assisted in the scheme.

Reis had been scheduled to go to trial this month in Indianapolis.

Judge Magnus-Stinson took the plea agreement under advisement but didn’t set a sentencing date. She is expected to rule on the agreement after she receives a pre-sentence report from the federal probation department.

I reported then that she was offered 18 months in prison and would have to pay a large fine and restitution. However, it appears that her prison time was increased and her financial obligations were decreased in this final deal.