A group of Chabad rabbis in Israel this week signed a letter denouncing one of their own for lighting a torch in the State of Israel’s official Yom Ha’atzmaut celebration.

While Chabad has a strong presence in Israel, the movement has complicated relationship with modern political Zionism that varies among its different factions, from refusing to recognize the state to serving in the army.

This year, Israeli officials invited Rabbi Shimon Rosenberg, whose daughter was the Chabad rebbitzen killed in the Mumbai terror attacks in November 2008, to light one of twelve torches Monday evening at the Mount Herzl military cemetery. The candle lighting is part of an annual ceremony that separates Remembrance Day from Independence Day. Rosenberg, who lives in Israel, is raising his grandson, Moishe, who survived the attack.

“This whole event is very exciting. To light the torch on such an auspicious day, especially this year, when the theme uniting the torch-bearers is ‘all Jews are responsible for one another.’ For me, this is a special Shlichus [mission]. The fact that they chose me is not a simple thing. I am not representing myself, rather, all the Shluchim [emissaries] of the Rebbe in Israel and the Diaspora.”

“Let it be known that the participation of a Chabad Chossid (R’ S. R.) at a ceremony which is foreign to the spirit of traditional Judaism, is at his own initiative, and does not represent the Shluchim or Lubavitch Chassidim. The Chabad Beis Din opposes his actions.”

The Chabad Rabbinic Court itself did not sign the letter, and a spokesman at Chabad international headquarters in Brooklyn, New York, said the organization was not involved in the decision.

“There were various opinions from the rabbis, and headquarters was not consulted and did not weigh in on the decision to issue an opinion on this,” Yaacov Behrman, media liaison for lubavitch.com.

The rabbis who signed the letter eventually backed off their demands that Rosenberg withdraw from the ceremony, saying it would be a “Chilul Hashem,” desecration of God’s name, according to reports on kikarhashabat.co.il. They advised Rosenberg to participate as an individual, not as a Chabad representative, and Rosenberg inserted the word “Eretz,” “land of” into the official text, rendering it “L’tiferet Medinat Eretz Yisrael,” “For the glory of the State of the Land of Israel.”

S. Crombie, who edits the blog Chabad.info, denounced Rosenberg. Chabad.info is not an official Chabad Web site, according to the Chabad media office in Brooklyn, and is run by adherents to the belief that the deceased Rabbi Menachem Mendel Schneerson is the Messiah.

“Unfortunately, as the days went by it became clear that this was not just a horrible nightmare. Indeed, it became known, that for the first time a Chabad Chossid was to take part in a ceremony which stands for, first and foremost, the denial in Hashem and His Torah,” Crombie wrote. “Now there is no choice, but to publicly declare to the world: You do not represent the Shluchim of the Rebbe! This act is a public war again Hashem and his Moshiach [Messiah]!”

Rabbi Dovid Eliezrie, director of Orange County’s North County Chabad Center in Yorba Linda and a staunch supporter of Israel, said Chabad’s stand on the modern State of Israel is complex and nuanced. Early in the history of Zionism, Chabad was concerned that Zionism would replace Jewish identity based on spiritual values with one rooted in secular nationalism. But when Israel became a reality, Chabad made the decision to actively engage in Israeli society, while many other Chasidic sects opted to distance themselves.

Eliezrie said Chabad men serve in the army, and Chabad is engaged in religious outreach and social welfare projects that reach all sectors of Israeli society. The Lubavitcher Rebbe was a confidante of nearly every prime minister and president of the State. Chabad, which does not have a political party in Israel, takes a strong stance against giving back any strategic land the loss of which might endanger Jews.  Some Chabad schools celebrate Yom Haatzmaut, Eliezrie said.

“We have tremendous support for and involvement with Israel. At the same time, we want Judaism to be the cornerstone of the Jewish state, not secular nationalism,” Eliezrie said. “We try to be good citizens to the best of our ability, we contribute to the society on many levels, our children serve in the army. Still we would like to see Israel be more than it is today, a society enriched with Jewish values and ideas, and we are still awaiting the arrival of Moshiach.”

An essay on Chabad.info offers another perspective. Rabbi Dovid Meir Drukman, a signatory on the letter and chief rabbi of Kiryat Motzkin near Haifa, notes Chabad’s extensive involvement in Israeli society, but he said that does not translate into support for the state.

He notes an instance in which the Rebbe protested the singing of Hatikvah, the Israeli national anthem, at a Chabad gathering, and says the Rebbe refused to use the words “Medinat Yisrael,” the State of Israel. Drukman reports that the Rebbe forbade the Star of David from being printed on Chabad books.

I was at a Chabad event years ago at which a co-sponsor who was emceeing the event asked everyone to rise and join in singing Hatikva.

And that's just what the audience did.

As if shot out of a cannon, Chabad's representative to the Upper Midwest Rabbi Moshe Feller bolted across the room, ripped the microphone out of the emcee's hands, and began loudly singing the Chabad children's song "We Want Moshiach Now!" to drown out the voices of the by now befuddled crowd.

The 5th and 6th Chabad-Lubavitch rebbes, Sholom DovBer Schneersohn and Yosef Yitzchok Schneersohn, the Rebbe's immediate predecessor, were extreme anti-Zionists who would have been at home as members of Neturei Karta. They were leaders of the haredi anti-Zionist movement.

Did Chabd's policy change after the founding of the State of Israel?

Or more accurately, its PR changed.

Once Israel became an independent state, it was responsible for its own security, and the state became the darling of Jews worldwide.

So Chabad changed on the outside.

But on the Chabad's inside, the State of Israel remains a rejection of God's will and a profoundly un-Jewish creation. 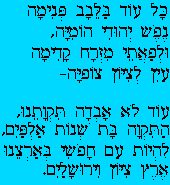 As long as the Jewish spirit is yearning deep in the heart,

With eyes turned toward the East, looking toward Zion,

Then our hope - the two-thousand-year-old hope - will not be lost:

To be a free people in our land,

The land of Zion and Jerusalem.

Posted at 09:27 AM in Chabad, Chabad Anti-Zionism, Haredim, Israel | Permalink