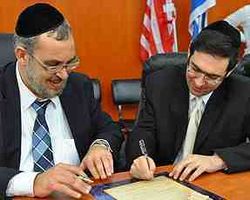 In a ceremony held last week in the Israeli city, Bnei Brak Mayor Yaakov Asher and his American counterpart, Menashe Miller, signed a Twin City Alliance in a bid to jointly develop and advance the Torah centers in the two cities.

Asher also visited Beth Medrash Govoha, the Lithuanian Lakewood yeshiva, which is one of the biggest in the world. Together with Rabbi Aaron Kotler, the yeshiva's chief executive officer and one of the most influential Jews in New Jersey, he decided to sign the alliance.

The mayors of the two cities, rabbis, council members and representatives of the US Embassy in Israel and the Union of Local Authorities gathered last Monday at the Bnei Brak City Hall.

The Israeli mayor said he could have signed alliances with larger and more famous cities, but that "as the capital of the world's haredi public", Bnei Brak decided to choose a city with a similar Torah spirit, and Lakewood is one of the only cities in the world which meet this definition.

The alliance will also be signed in a ceremony in New Jersey later on.

Joint teams appointed by the two mayors have been asked to come up with ideas for activities focusing on education, spiritual issues, Jewish culture, health and welfare. Suggestions include projects for large families and an annual "education conference" which would be attended by teachers from both cities.

Many in the haredi public hoped that the move would bring some money into Bnei Brak, one of the poorest cities in Israel, but Asher rushed to lower expectations. "We're not here to 'schnorr' and to enrich the municipality's treasury. This is not our goal."


Nonetheless, Asher said he expected businesspeople from Lakewood investing in Israel to settle in Bnei Brak's new business center, as "their taxes will be a great contribution to the city".

The mayor also spoke about a combination between a "material" quality of life and nurturing the spiritual side in both cities. According to Asher, in such places "based on Torah and Hasidism", any physical activity is spiritual doing as well.

"The mayors of both municipalities see it as their duty and privilege to develop and advance the Torah centers in their cities… Israel's leaders welcome the activity for economic and physical development, while maintaining their unique character and spiritual identity which affects the Holy Land and the Diaspora."

The two mayors visited the homes of senior rabbis in Bnei Brak and even dined with some of them on Shabbat. They also toured the city's Torah institutions.

Miller said during the signing ceremony that "the two municipalities have one goal – to work to glorify Torah and Judaism and increase the honor of Hashem."