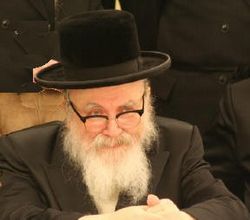 NEW SQUARE — Grand Rabbi David Twersky, dynastic leader of the Skver Hasidim, has asked his people to pray for the village resident severely burned in an arson attack on Sunday. [This appears to be inaccurate, as you can hear in the audio read in the story I posted early this morning. Twersky never mentions the victim by name and his remarks were far more general than The Journal News reporter claims.] At the same time, the lawyer for the burned man is calling for a federal investigation.

The lawyer, Michael Sussman, representing Aron Rottenberg and his family, described the violence in strong language as he addressed Eric Holder, U.S. attorney general, in a letter.

Until yesterday, Twersky had been publicly silent, though unsigned notices of sympathy have been posted in the synagogue. The community religious court has condemned the attack.

"Violence has never been our way," Twersky said, according to a website that posted a telephone number to hear his speech in Yiddish with an English translation.

"The holiday of Shavuos is a time of healing and I hope that as the holiday approaches the people in our village will be like that of the Jews at the time of the giving of the Torah 'as one person with one heart,'" Twersky said.

Rottenberg, 43, had been targeted by the community's religious leaders since September for refusing to pray in the grand rabbi's synagogue, a violation of the rabbi's rules, his family and lawyer have said.

His family and supporters said the campaign culmiunated with an arson attack on Sunday that left Rottenberg gravely ill with third-degree burns across 50 percent of his body.

Sussman said in his letter the incident was not an isolated incident.

"It illustrates a systemic crisis of religious bigotry and intolerance that has, for decades, infected the Village of New Square," he wrote to Holder.

New Square leaders have denied anyone ordered the grand rabbi's follower, Shaul Spitzer, 18, to burn down the family's Truman Avenue house - near the main synagogue.

An unnamed group of New Square residents had previously issued a statement of sympathy for Rottenberg and Shaul Spitzer, 18, through Hank Sheinkopf, a Democratic Party consultant.

Sheinkopf has declined to identify the group members. He was aware of the rabbi's statement.

Rottenberg, a plumber and father of four children, confronted Shaul Spitzer, 18, and an incendiary device went off, Ramapo police said. The incident occurred before 4 a.m. Sunday.

Rottenberg underwent skin grafts this week and faces more surgery in Westchester Medical Center, his family has said. His son-in-law, Moshe Elbaum, said he was feeling better this morning.

His family and friends posted $300,000 cash bail, as he remains in Cornell Medical Center burn unit with third-degree burns to his hands.

Related Post: After Days Of Intense Pressure, The Skvere Rebbe Speaks About The Attack.