Shmuel Eliyahu, the Orthodox rabbi who told Jews not to rent or sell property to all non-Jews, especially Israeli Arabs, has won an award. 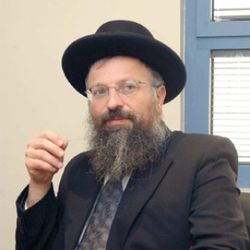 The rabbi of Safed who encouraged citizens to refuse to rent apartments to non-Jews won an award at an annual conference dealing with issues of the Land of Israel this week.

The conference, which was founded by the right-wing religious movement Komemiyut (independence), was officially called the "Land of the nation or land of all the nation’s citizens."

Rabbi Shmuel Eliyahu was one of 18 prominent rabbis who signed a petition that came to be known as the 'rabbis' letter' in October urging Jews to refrain from renting or selling apartments to non-Jews.

Eliyahu reiterated his prior message at the conference held in the central town of Ramle, saying "the Jewish law is clear… Thank God that in Safed, land isn't sold to foreigners."

Minister of Science and Technology Daniel Hershkowitz awarded Eliyahu with the prize for "his actions, effort and devotion to the Jewish nature of the Land of Israel."

Most of the signatories were from Safed, a city that has seen an increase in its Arab student population that is enrolled at the town's local college.

Eliyahu was the most prominent figure to sign the letter.

The rabbis' letter, which was originally published months before, urges Jewish owners of apartments to reconsider renting their properties to non-Jews since it would deflate the value of their homes as well as those in the neighborhood.

"Their way of life is different than that of Jews," the letter stated. "Among [the non-Jews] are those who are bitter and hateful toward us and who meddle into our lives to the point where they are a danger."

At the conference this week, Eliyahu attacked the media for its reaction to the letter, saying "everyone realizes the enormity of the danger [of renting to non-Jews]," adding "they [non-Jews] eat one neighborhood and then another, and I am expected to reckon with some journalist?"

The rabbi slammed those who have accused him of being a racist, saying that a survey showed that 74-percent of the public supports the letter. He added that he believed the letter had backing from God.

Shmuel Eliyahu, the Orthodox rabbi who told Jews not to rent or sell property to all non-Jews, especially Israeli Arabs, has won an award.