Akko's Chief Rabbi Yosef Yashar has asked the imam of the al-Jazar Mosque, Sheikh Samir Asi, to instruct Arab business owners in Akko's Old City to avoid selling chametz (leavened food) to Jews during the Passover holiday. The sheikh has agreed to do so. 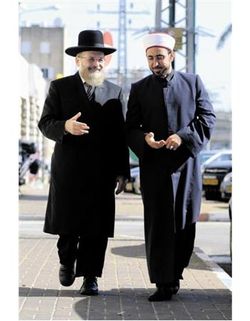 Akko's Chief Rabbi Yosef Yashar has asked the imam of the al-Jazar Mosque, Sheikh Samir Asi, to instruct Arab business owners in the Old City to avoid selling chametz (leavened food) to Jews during the Passover holiday. The sheikh has agreed to do so.

"I believe that if a Muslim cleric issues this request as an authoritative religious decree, the Arabs will honor it and won't sell chametz to Jews during Passover," explains Rabbi Yashar.

The rabbi visited the sheikh's home earlier this week and asked him to forbid Arab business owners in the Old City to sell chametz to Jews.

"The sheikh welcomed me with a lot of respect. We are good friends. I turned to him and said, 'Look, we are strict about respecting your religion and do everything not to hurt you, and we expect you to do the same. Please, do something about the Jews who come to the Old City, buy and eat Chamez during Passover. It really hurts our feelings.'"

What exactly did you ask the sheikh to do?

"To turn to all bakery owners in particular, and all Arab residents in general."

How is this year different, and why did the city's rabbi choose to turn to an Arab cleric this year?

"In recent years, Akko has become a center of attraction for Jews looking to buy chametz. We want this thing to stop, so that the stigma attached to this city as a place that sells chametz will be removed."

Why did you turn to Sheikh Asi of all people?

The Chametz Law doesn't apply to the Old City. Do you think the Arabs will comply with the sheikh's request?

"We didn't make use of the law. This is about mutual respect – we maintain the coexistence between us here and do everything to respect their religion. Fortunately, he accepted and said he would definitely issue some sort of request. He also promised to discuss the need for coexistence in peace in his Friday sermon."

Do you really think restaurant and bakery owners in the Old City will check who is Jewish during Passover and refuse to sell them chametz?

"I think they will if we turn to a religious scholar they admire and listen to."

"The rabbi and I are in very good relations and we cooperate on anything related to the city," says Sheikh Asi.

"In this case, this is the first time the rabbi approaches me on this issue and asks me to plead with the Old City's merchants. I accepted his request immediately. We live in a mixed city and we must be considerate towards the needs of all residents from both sectors."

"Therefore I plan to turn to bakery and business owners and ask them not to sell chametz to Jews, although I am certain that not all business owners will comply with the request. I can't force anyone to do it, and I don't plan to, but I'll do the best I can to honor the rabbi's request."

"I'm not going to ask every person if he's Jewish or Arab," says a bakery owner from the Old City. "It's their religion, not mine, and I will sell pita bread."

And if the sheikh approaches you and asks you not to sell Jews chametz, will you agree?

"There will be those who'll listen and accept his request, and some who won't. We'll sell."

"I'll sell to any customer," says another baker from the Old City. It’s not my problem that Jews east chametz on Passover."

The rumor about the rabbi's request from the sheikh spread quickly across the Old City, surprising most people. Many expressed their rage over the fact that the rabbi put the sheikh into an unpleasant situation.

It turns out that Sheikh Asi has already approached several business owners in the Old City, including Said Abu Beker, the owner of the famous Hummus Said restaurant.

"I would like to accept the request and even close the business, but I can't be the only one," says Said's son, Samir Abu Beker. "My father respects the sheikh and the rabbi, and we have no problem closing the restaurant and our pita bakery.

"We would welcome a law ordering all businesses in the city to shut down during the holiday, as we would love to take a vacation. I don't believe the merchants will accept the demand and refuse to sell to Jews or close their businesses."

City Council Member Ahmed Uda doesn't understand why the religious leaders, from both sectors, are creating confusion in the city. "The rabbi's appeal to Sheikh Asi, the imam of the biggest mosque in Israel, is delusional. I think Rabbi Yashar is just trying to make headlines.

"If it bothers him so much that the Jews come to the Old City to buy chametz during Passover, he should go there himself and ask every visiting Jew not to buy or eat chametz."

Posted at 08:35 AM in Israel, Religion, Religion & State | Permalink

Akko's Chief Rabbi Yosef Yashar has asked the imam of the al-Jazar Mosque, Sheikh Samir Asi, to instruct Arab business owners in Akko's Old City to avoid selling chametz (leavened food) to Jews during the Passover holiday. The sheikh has agreed to do so.