An Orthodox school's principal in central Israel has expelled a student for taking part in a local beauty pageant and winning the contest. 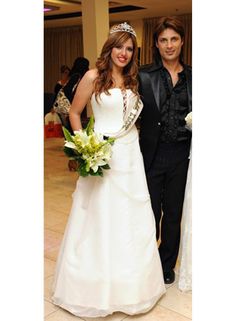 A religious school principal in central Israel has expelled a student for taking part in a local beauty pageant and winning the contest.

Maayan Mader, an outstanding student and a representative of the school's student council, decided to sign up for a beauty pageant in the city of Gedera about two months ago, after ensuring that the contest did not include swimsuits or provocative clothing.

"At the end of the event, when I was declared the winner, I felt like the happiest person on earth. I never believed I would win," she recounted in a conversation with Ynet. "We’re a small community and everyone supported and applauded me, and there was no doubt that this was the greatest experience in my life."

Mader's euphoria was interrupted two days later, when she was summoned to the principal's office and expelled from school for taking part in the beauty pageant. According to the principal, the contest's participants wore sleeveless dresses – violating the school's rules, which require modest clothing.

"I was in shock and didn't know what to say," Mader told Ynet. "Even in my worst nightmares I never thought that a beauty pageant would cause such a mess, especially as I was strict about wearing modest and unrevealing dresses.

"I have a lot of respect for the school's rules and procedures, but the principal cannot intervene in my private life and tell me what to do. This is my last year in school and I want to graduate in the best way possible. I feel helpless, but I believe everything will be okay," she added.

Mader's furious parents turned to the local council head, who promised to help.

"It hurts me to see my daughter like this," her mother said. "She went to the pageant for fun, and when she was announced the winner I felt very proud and happy. We must not forget that she is about to take her matriculation exams and the school must not destroy her future like this."

The Education Ministry said in response, "When the school learned of the student's participation in the beauty pageant, her parents were summoned and informed that such a contest contradicts the values of religious education.

"The student chose to ignore the instructions, and the case is currently being looked into by the department for state religious education."

Many of Gedera's religious residents slammed the decision to expel Mader.

"I am a religious woman, but with all due respect, this is not Iran," said a woman named Ester. "The contest was very respectable and the girls were charming. It's a shame that the Education Ministry has decided to spoil this experience for them."

Meir, another resident, added that "it was a beautiful event which brought Gedera's religious and secular residents closer. Unfortunately, instead of using this event to initiate joint activities between the sectors, the Education Ministry is sparking feelings of polarization and alienation."

The event's producer, Guy Harari, said he had reached an agreement with the council head that the pageant would not include swimsuits and revealing clothes due to Gedera's large religious community.

"I come from a traditional home, and I'm aware of the sensitivity among the religious community, so I made sure to make this promise to council head Yoel Gamliel, who is a religious man himself.

"We must remember that these are not haredi girls, but observant girls whose bodies were not revealed during the event," Harari added.

"It's a shame that instead of supporting the community, the education system is doing the exact opposite. Instead of appreciating the contest's huge contribution to the community and to the girls, they are only looking at the negative aspects."

An Orthodox school's principal in central Israel has expelled a student for taking part in a local beauty pageant and winning the contest.