"There is no doubt that the talented director Simcha Jacobovici created an interesting film with a real archaeological find at its centre, but the interpretation presented in it has no basis in archaeological findings or research," the Israel Antiquities Authority said. 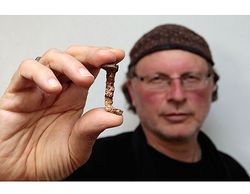 Could two of the nails used to crucify Jesus have been discovered in a 2,000-year-old tomb in Jerusalem?

And could they have mysteriously disappeared for 20 years, only to turn up by chance in a Tel Aviv laboratory?

That is the premise of the new documentary film "The Nails of the Cross" by veteran investigator Simcha Jacobovici, which even before its release has prompted debate in the Holy Land.

The film follows three years of research during which Jacobovici presents his assertions – some based on empirical data, others requiring much imagination and a leap of faith.

He hails the find as historic, but most experts and scholars contacted by Reuters dismissed his case as far-fetched, some calling it a publicity stunt.

Many ancient relics, including other nails supposedly traced back to the crucifixion, have been presented over the centuries as having a connection to Jesus. Many were deemed phony, while others were embraced as holy.

Jacobovici, who sparked debate with a previous film that claimed to reveal the lost tomb of Jesus, says this find differs from others because of its historical and archaeological context.

"What we are bringing to the world is the best archaeological argument ever made that two of the nails from the crucifixion of Jesus have been found," he said in an interview, wearing his trademark traditional knitted cap.

The film begins by revisiting an ancient Jerusalem grave discovered in 1990 which was hailed by many at the time as the burial place of the Jewish high priest Caiaphas, who in the New Testament presides over the trial of Jesus.

The grave, along with a number of ossuaries, or bone boxes, was uncovered during construction work on a hillside a few kilometers south of the Old City. It has since been resealed.

Caiaphas is a major figure in the Gospels, having sent Jesus to the Romans and on to his death, and one of Jacobovici's assertions is that the high priest was not such a bad guy.

Two iron nails were found in the tomb, one on the ground and one actually inside an ossuary, and, according to the film, mysteriously disappeared shortly after. Jacobovici says he tracked them down to a laboratory in Tel Aviv of an anthropologist who is an expert on ancient bones.

And if they are indeed the same nails – eaten away by rust and bent at the end, almost purposefully – was their disappearance a conspiracy or a logistical slip-up?

No definite answer is offered.

"If you look at the whole story, historical, textual, archaeological, they all seem to point at these two nails being involved in a crucifixion," he said. "And since Caiaphas is only associated with Jesus' crucifixion, you put two and two together and they seem to imply that these are the nails."

The Israel Antiquities Authority, which oversaw the Jerusalem excavation, said in reaction to the film's release that it had never been proven beyond doubt that the tomb was the burial place of Caiaphas. It also said that nails are commonly found in tombs.

"There is no doubt that the talented director Simcha Jacobovici created an interesting film with a real archaeological find at its centre, but the interpretation presented in it has no basis in archaeological findings or research," it said.

"There is no doubt that the talented director Simcha Jacobovici created an interesting film with a real archaeological find at its centre, but the interpretation presented in it has no basis in archaeological findings or research," the Israel Antiquities Authority said.