According to a recent decision issued by the U.S. Court of Appeals for the Ninth Circuit, Gasper soon learned that a Montreal firm was making illicit copies of the movies and selling them to wholesalers. The primary client of the Montreal bootlegger was a New York-based company called Direct Distributors, Inc., run by a young Israeli named Ben Zion Suky. 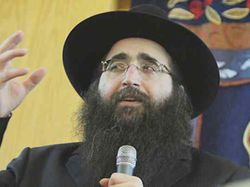 So close is Suky to Rabbi Yoshiyahu Yosef Pinto that he owns property with the rabbi’s wife. He is the rabbi’s translator, gatekeeper and conduit to the outside world in America.

But while Pinto is revered in the United States and Israel for his financial advice, especially in real estate, Suky’s own real estate business has faced a string of lawsuits, foreclosures and legal judgments. And while Pinto is an ultra-Orthodox rabbi, his adviser’s involvement in the pornography industry would seem to run counter to the tenets of modesty espoused by traditional Judaism.…

Suky is 33 years old, though he looks younger. Raised in Petah Tikva, an Israeli city near Tel Aviv, he moved to the United States 17 years ago. He has been associated with Pinto for a decade, and for the past year he has been “next to him all the time,” in his own words.…

Update 9:35 pm CST – According to Rick Sanchez of the Huffington Post, it turns out Suky has made some contributions to politicians, including almost $10,000 to Anthony Weiner's mayoral campaign and $48,100 to House Majority Leader Eric Cantor.