"The black market in these graves is tremendous," a government source said. "It never stops." 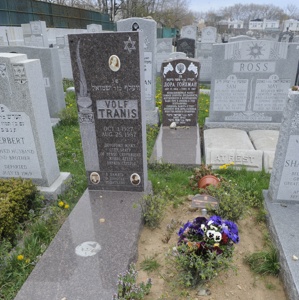 According to the New York Post, a Brooklyn Jewish family was horrified to find out that a stranger had been buried in next to a beloved family member in what was supposed to a double plot they had owned for 24 years in Washington Cemetery:

…The cemetery denied responsibility for the grave error, claiming the plots are managed by various Jewish burial societies. Immigrants formed the societies decades ago, buying up plots and administering them for members.

Thousands of the societies have since become defunct, leaving the groups and the grave sites in their control vulnerable to corruption, including double-selling of plots.

"The black market in these graves is tremendous," a government source told The Post. "It never stops."

Kushnir hasn't the heart to tell her elderly, ill mom that her future grave [next to her beloved husband Wolf Tranis] is [now] occupied [by a stranger].

The family asked the cemetery to exhume Kholodenko, a 63-year-old Sheepshead Bay breast-cancer victim, and return the plot. Instead, said family lawyer Eric Rothstein, the cemetery offered only to dig up Wolf and move him.

"No one wants to stand up and take responsibility for the error," he said. "Apparently, anybody can pull up with a hearse any time of day to bury someone and they're not going to check."

Kushnir and her family last week sued the cemetery, as well as the funeral home, I.J. Morris, of Brooklyn, and the society that originally sold the plots.…

"The black market in these graves is tremendous," a government source said. "It never stops."