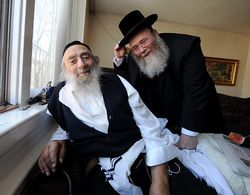 A Borough Park man has an unorthodox style of preparing for Passover - a backyard bakery.

Zecheriah Brauner, 89, fires up a huge outdoor oven once a year to make matzo for the Jewish holiday, which starts this Monday.

A retired baker, Brauner began the tradition of cooking the thin, crispy wafers in his backyard 20 years ago, and it now feeds more than 150 relatives and neighbors.

While the flattened bread is cooked the day before Passover begins, setting up a full-fledged kosher kitchen outside Brauner's 54th St. home takes a week.

"It looks like any other driveway the rest of the year," said Sandy Brauner, 21, one of Zecheriah's 102 grandchildren. "It takes a lot of work."

Kosher rules forbid sunlight from shining on the dough, so Sandy rigs a high canopy and wooden walls that block out rays.

Then they build the stations for mixing flour and water, flattening the dough, and rolling it into discs.

A wood- and coal-burning oven sits in a shed and bakes the matzos in under a minute.

Over the afternoon, it churns out hundreds of them for family and friends who flock to the house and serve them at Seder - the feast on the first two nights of Passover.

From start to finish, each batch takes exactly 18 minutes and is done under the supervision of a rabbi from the ultra-Orthodox community.

"Every half step is written out on how to make it," said Alexander Rapaport, 33, another grandson of Brauner.

The retired baker can't easily move around the makeshift bakery anymore, but he still starts the ceremonial mixing of flour and water - the only ingredients in matzo.

Luckily, help is nearby. The family calls 54th St. "Brauner's block," because relatives live in eight other houses on the street.

Groups of 30 men and boys aged 13 and up work in shifts on a matzo assembly line.

"It gives you a different emotional feeling to eat matzo that you made yourself," said Yosef Rapaport, 56, Brauner's son-in-law.

"Everyone has a chore. The grandchildren run around trying to help," he said.

Most people in the ultra-Orthodox Jewish neighborhood stock up on matzos at bakeries or synagogues.

Rabbi William Handler, who lives in the neighborhood, tipped his hat to the family for keeping the tradition alive.

"It's the way it used to be done in Europe," said Handler. "It's an expense and requires expertise. Somebody has to really want to do it to set that up."