An 80 year old Monsey mother and her son have been charged with stealing $10 million from at least 75 people through a Ponzi scheme. They are both closely linked to Rabbi Leib Tropper, who was caught pressuring a potential convert to sex with Tropper's friends. 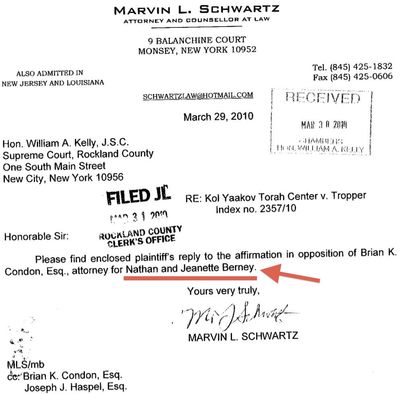 A 80-year-old Monsey mother and her son have been charged with stealing $10 million from at least 75 people through a Ponzi scheme, Rockland District Attorney Thomas Zugibe said today.

Jeanette Berney, 80 and of 25 Highview Road, and Elliot Berney, 52 and of 12 Langiers Drive in Monsey, were each charged with second-degree grand larceny.

Zugibe said the Ponzi scheme crafted by the Berneys involved convincing customers — including mostly neighbors and family — that their firm "NHI Metals" was investing in "bank notes" or "metal securities" in Europe.

The investigation found the investment company didn't exist and no investments of customers' money was made, Zugibe said.

Many of the swindled customers invested large sums of money and lost their life savings, Zugibe said.

Anyone who may have done with the Berneys is asked to call the District Attorney's Office 845-638-5013.

According to sources, Berney and his mother allegedly laundered money for Tropper – the ultra-Orthodox rabbi who tried to have a potential convert to Judaism have sex with his friends in exchange for financial assistance and a converion to Judaism – helping his to loot the yeshiva just before his downfall.

Motion against the Berneys over Kol Yaakov yeshiva as a PDF:

Photo: Above right, Rabbi Leib Tropper; above center, front page of motion in suit over Kol Yaakov's assets that shows the Berneys are linked to Tropper.

Update 1:55 am CST 3-3-11 – A source tells me Jeanette Berney's husband was a partner of uber crooks Marc Rich and Pincus Green, who were pardoned by President Bill Clinton in a highly controversial move in the waning hours of his presidency. Berney's husband also had a company that was "defunded" by the SBA, my source says.

Exclusive: The Story Behind The Tropper Scandal.

Exclusive: The woman at the center of the Rabbi Leib Tropper/Eternal Jewish Family scandal explains what really happened in that hotel room.

SUFFERN — An 80-year-old Monsey woman and her son face a grand larceny charge, accused of stealing $10 million through a Ponzi scheme.

Jeanette Berney of 25 Highview Road and Elliot Berney, 52, of 13 Langeries Drive, both of Monsey, are believed to have stolen the money from at least 75 victims, Rockland County District Attorney Thomas Zugibe said.

The mother and son are suspected of convincing customers — mainly neighbors, relatives and acquaintances made through those connections — to invest large sums of money into their company, NHI Metals Ltd., authorities said.

The Berneys told customers that the money would be invested in European "bank notes" or "metal securities," Zugibe said.

Authorities believe no such investments were made and that the Berneys simply kept most of the money, paying out only small monthly interest payments to certain investors to encourage additional investing.

According to the state Department of State, Jeanette Berney was chief executive officer of NHI Metals Ltd. when it was begun in 1997. The company operated out of her Highview Road home until it was dissolved in 2003.

Zugibe said the investment scheme might have begun as early as 2006, when the pair continued to solicit investors despite their company's inactive status with the state.

The thefts are alleged to have continued up until Tuesday, when agents with the Rockland County Special Investigations Unit and the Federal Bureau of Investigation arrested the Berneys.

Officers at the county jail said Wednesday that Elliot Berney was released Tuesday night. Whether he posted bond or a cash alternative was unclear. Zugibe said Elliot Berney had also surrendered his passport. Elliot Berney is due in Town Court on March 15.

An 80 year old Monsey mother and her son have been charged with stealing $10 million from at least 75 people through a Ponzi scheme. They are both closely linked to Rabbi Leib Tropper, who was caught pressuring a potential convert to sex with Tropper's friends.