Bernard Freilich, a $100,000-a-year State Police rabbi who carries an unauthorized badge and illegally presents himself as a police officer has equipped his private vehicle for years with "official" license plates registered to an Orange County village where he is not employed. Freilich "really cheapens the job. We're supposed to hold ourselves to a standard where we persevere through all the crud and he's a giant stain on the job's credibility." 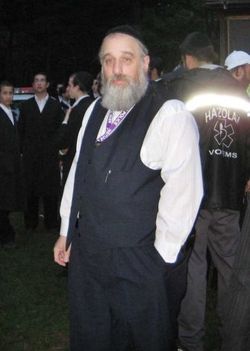 ALBANY -- A $100,000-a-year State Police rabbi who carries a badge and presents himself as a police officer has equipped his private vehicle for years with "official" license plates registered to an Orange County village where he is not employed.

The rabbi, Bernard Freilich of Brooklyn, has transferred the special plates from vehicle to vehicle dating back years by submitting registration forms that contain incomplete and misleading information, according to state motor vehicle records released to the Times Union.

The records show Freilich was not required to submit proof of any official role he has with the village, Kiryas Joel, whose leaders have declined to respond to questions. The insurance cards for the vehicle list Kiryas Joel as the registered owner, also raising questions about liability.

Official plates are normally distributed only to employees of government agencies or leaders of volunteer organizations, such as fire departments. State law indicates "a vehicle assigned official plates must be owned or controlled by a political subdivision and operated by its employees."

Freilich's use of the license plates has riled residents in a Brooklyn Jewish community where Freilich has been accused of abusing his law enforcement credentials and pulling people over. His 2010 GMC sport-utility vehicle is equipped with emergency lights, a siren, police radio and a State Police "official business" placard.

DMV registration forms for Freilich's vehicle list a mailing address for a private post office box in Kiryas Joel that is different from the official post office box listed for the village. An entry on the forms for "address where you live" is left blank. Freilich checked a box indicating the vehicle is for "personal use" even though he was applying to transfer official government plates. The DMV forms list Freilich's personal cell phone number as a contact number and his village title as "pres." It's unclear what the title means. The village is governed by a mayor, Abraham Wieder, and a board of trustees.

Wieder did not respond to multiple requests for comment left at his residence, private workplace and the village's offices. Kiryas Joel is exclusive to residents of Hasidic faith and has strong political connections to top state leaders, including the governor.

It took DMV several weeks to retrieve records related to seven official plates, including Freilich's, that are issued to Kiryas Joel.

Freilich, 59, was appointed as a State Police liaison to the Jewish community by Gov. George Pataki in March 1995. The rabbi position, which currently pays $100,780, was created by Gov. Mario Cuomo.

A spokesman for Gov. Andrew Cuomo did not respond to repeated requests for comment regarding Freilich. The governor's office also declined to promptly provide any records on file with their office related to Freilich.

Several troopers, including former superintendents, have complained that Freilich's job is unnecessary and that the position was created to secure votes from powerful downstate Jewish voting blocs.

Brodie M. Mack Jr., who retired from the State Police in 2004, said Freilich once confronted him in a town court in Tuxedo, Orange County, and allegedly demanded Mack fix a ticket that had been issued to a Hasidic man. Mack, a former investigator who also specialized in commercial-vehicle enforcement, said Freilich threatened to use his connections if Mack did not do what he was asked.

Mack said he declined to fix the ticket and exchanged heated words with Freilich.

"This was back when troopers prosecuted traffic tickets," Mack said. "He's a problem because if you talk to other guys who are retired and guys who are still in State Police, I think they'll tell you this guy really cheapens the job. We're supposed to hold ourselves to a standard where we persevere through all the crud and he's a giant stain on the job's credibility."

Freilich's 16 years as a loosely-defined State Police "special assistant" have been controversial.

In 1999 Freilich was indicted in Brooklyn on charges of intimidating a witness for allegedly threatening the life of a young woman if she testified against her father, a Russian Orthodox Jew accused of sexually abusing her for years. Freilich was later acquitted.

Freilich declined to answer detailed questions about his official plates. He said village officials know he has the plates, that his vehicle is registered and insured to the village, and that he handles "public relations" for the village in an unpaid role.

"They know, everybody knows about it. It's legit and everything is 100 percent," Freilich said. "Stay away from people who are just lying to you."

Ken Brown, a DMV spokesman, did not respond to repeated requests for comment.

The DMV's records indicate there are seven vehicles, including Freilich's, that have official plates registered to Kiryas Joel. In a written response the DMV said many of the records relating to the village's use, authorization and distribution of the official plates have been destroyed.

What's left of the records makes it hard to determine who uses the license plates or why.

Mike DiSilivio, who retired from the State Police and was a longtime investigator in New York City, said he crisscrossed the state many times to help console troopers and their families during crisis, including line-of-duty deaths.

"I never saw Freilich at the scene of an incident or at a hospital; nor did I ever hear of him offering assistance or aid to any member of the State Police," DiSilvio said. "His name would only come up in reference to a confrontation with one of our members throughout the years, that's the only time I've ever heard of Freilich. I'm willing to bet you there's not one member of the State Police who could explain his duties. Even the people in headquarters don't know what he does, but maybe now they do, because they're all panicking."

Freilich does have supporters.

Preston Felton, a former State Police superintendent under Gov. Eliot Spitzer, said Freilich was an asset to the agency. Felton, who retired from the State Police, is a law enforcement consultant for Kiryas Joel.

"When I worked in New York City as a major I came to know him and I found him to be professional and to do good work," Felton said. "As superintendent I depended on him to have that relationship with those communities which gave me the ability to know what's going on."

The State Police have initiated an internal probe examining the circumstances of Freilich's use of a State Police badge. An agency spokesman said they did not issue the badge, but Freilich said a colonel, whom he could not identify, gave it to him more than 10 years ago.

The internal investigation was sparked by a March 6 Times Union story that raised questions about whether Freilich has presented himself as a police officer and used his private vehicle to pull people over.

In 2008 Jewish leaders in Brooklyn said they conducted a rabbinical investigation of Freilich after receiving complaints from people claiming Freilich had pulled them over. According to two people familiar with the matter one of the complaints was filed by a man who said Freilich pulled him over on Route 42 near Monticello, Sullivan County.

The man declined to be interviewed for this story, saying he feared retribution.

A leader of the Brooklyn congregation where Freilich is a member confirmed that the man alleged Freilich used emergency lights and a siren to pull him over. The man told religious leaders, who did not report the incidents to police, that Freilich had a State Police badge around his neck when he made the stop. The congregational leader said Freilich quickly left when the man threatened to call 911.

Freilich said the allegations are false and that there was no investigation of the matter by a rabbinical council.

"It's all baloney. It's made-up stories. I never stopped anybody," Freilich said. "There was no rabbinical, there's no person, it's no such thing. They're pulling you into a thing which is baloney from top to bottom."

Bernard Freilich, a $100,000-a-year State Police rabbi who carries an unauthorized badge and illegally presents himself as a police officer has equipped his private vehicle for years with "official" license plates registered to an Orange County village where he is not employed. Freilich "really cheapens the job. We're supposed to hold ourselves to a standard where we persevere through all the crud and he's a giant stain on the job's credibility."