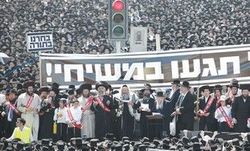 A sexual abuse case recently made public is shedding some new light on the development of the ethnic tensions that exploded in Emmanuel last year.

The Emmanuel affair took off in 2007, when a partition was erected in the middle of the local Beit Ya’acov girls’ school building to separate between girls in a “hassidic track,” composed of primarily Slonimer Hassidim, and the rest of the girls.

A High Court petition by Yoav Laloum and his Noar Kahalacha NGO charging ethnic discrimination led to the court ordering that the wall be taken down, and the Independent Education Center, which runs the school, obeyed.

Parents of the primarily Ashkenazi girls in the hassidic track then refused to send their daughters to the reunited school, on the grounds that the spiritual level of the other girls, primarily of Sephardi background, was inadequate.

The High Court sent some 30 fathers to prison for a short while for holding it in contempt, and over 100,000 haredim took to the streets in a massive demonstration against what was perceived as a secular court meddling in internal matters of haredi education and values.

The final solution was that the Slonimer Hassidim opened their own school, which – unlike the Beit Ya’acov one – receives no state funding.

After allegations were raised by a group of parents against Nussboim in 2007, he was removed from his position as principal but remained in the school as a supervisor.

The families of the boys turned in their despair to a psychologist for professional help, after their demand that Nussboim leave the country was not met, and the psychologist filed a police complaint, as her duty required, she told Channel 2.

Police launched an investigation, and in 2008 Nussboim was indicted. His trial has been taking place with him remaining under house arrest.

Nussboim’s attorney, Avigdor Feldman, said in response to the television report that the complaints were from families that belong to a certain Bratslav sect that does not agree with the school on many educational issues.

The fact that the Slonim community of Emmanuel supported Nussboim when the affair erupted, including helping finance his legal representation, had apparently contributed to the tension and polarization between the members of that hassidic court and the baalei tshuva (newly religious) and Sephardi families, who later faced off against each other about the girls’ school.

While Nussboim allegedly did not prey solely on Sephardi boys, the fact that it was those families who dared complain catalyzed the ethnic tensions.

Nussboim himself flatly denied all the charges in an interview to the Galei Israel radio station Tuesday night, and stressed the importance of preventing sexual harassment in educational institutions.

Laloum explained that his silence on the Nussboim case was a result of his rabbis’ ruling that he not raise it, in an attempt to reduce the desecration of God’s name.

“Many asked how we could contain these things and not release them to the public, especially when such information would have led to a deeper understanding of the [Emmanuel Beit Ya’acov] affair, including from an internal-haredi perspective,” he wrote in a statement Tuesday.

“There is no doubt that from a public-political perspective, this would have been the effective move, but the question was whether this was the right, kosher and worthy move. There was a desire to use these materials, especially in the face of the personal attacks of Slonimer Hassidim against me, my family, my children, including their use of what they knew were lies regarding my wife’s attire; violence, threats, intimidations, breaking into my e-mail and much more.

“Despite all of that, and in contrast to the other side’s conduct, common sense required not tipping the scales with this volatile material,” the statement continued.

“Members of the Noar Kahalacha leadership unanimously submitted the question to the rabbinic committee headed by our teacher Rabbi Yaakov Yosef, which weighed in on the issue and decided not to make use of the topic in public,” he continued.

“The struggle undertaken by Noar Kahalacha is to bring about clear and egalitarian religious criteria for accepting pupils to educational institutions that belong to all of us and are publicly funded. If a person wants to discriminate, he will have to do it at his own private expense,” he wrote.

“Our struggle bore partial success in Emmanuel, and today every principal is more than careful about discriminating against pupils based on their ethnic background, out of fear of the budgets [they could lose], as was the fate of those who built the wall in the middle of the Emmanuel school.”

Laloum also told The Jerusalem Post on Wednesday that the Noar Kahalacha rabbis backed the parents in the police complaint and the legal procedures against Nussboim.

He didn’t attempt to draw a direct line between Nussboim’s actions in the boys’ school and the wall in the girls’ school, but said that “there is no doubt that this was part of the background and the rift.”

The Kfar Saba court is expected to rule on Nussboim’s case in a month.