« Kill Civilians Who Are In Your Way, National Security Advisor Candidate Says | Main | The Man Behind The VIN Ban » 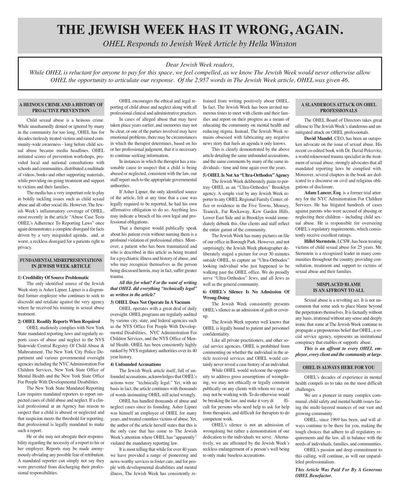 Here's the Ohel ad against The Jewish Week as a PDF file:

And here is The Jewish Week's response: 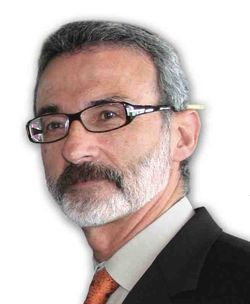 Responding to a front-page Jewish Week investigation last week (“Abuse Case Tests Ohel’s Adherence To Reporting Laws”) detailing the case of a mother who was believed to be sexually abusing her 5-year-old son, but whose case was never reported to secular authorities by the Ohel Children’s Home and Family Services, the agency placed a full-page ad in this week’s paper, accusing The Jewish Week of bias.

The ad, which appears on page 17, calls The Jewish Week’s coverage of the woman’s case “inflammatory” and “driven by a misguided agenda.” It states that the group was “compelled” to take out the ad because “The Jewish Week would never otherwise allow Ohel the opportunity to articulate our response.”

In fact, though, the paper has given Ohel multiple opportunities to respond to detailed questions not just about specific cases (where confidentiality rules may have prevented the agency from responding), but also about its practices and policies in general. These questions have covered a range of issues, including Ohel’s policies and practices regarding the treatment of known abusers referred to the agency by rabbis, to its internal protocols relating to the reporting of suspected cases of abuse — for example, whether it is standard internal protocol to consult with Ohel’s counsel and/or its halachic adviser before making a report.

With the exception of general statements that Ohel complies with the New York State mandated reporting law — which the ad restates — and provides information on private practitioners who may treat known offenders, Ohel has not given The Jewish Week direct answers to its questions.

Ohel’s ad also sought to discredit one of The Jewish Week’s sources on the story, clinical psychologist Asher Lipner. While the paper stands behind the credibility of Dr. Lipner, who has long been a staunch public advocate for victims of sexual abuse, The Jewish Week relied on multiple sources for the story. Some were involved, in one way or another, in treating the woman in question; others were told about the events of the case either as they were unfolding or shortly after they happened.

The paper’s sources made it clear that everyone overseeing and involved in the woman’s treatment came to believe that she was abusing her child because of statements made by the mother herself.

The law requires a report to the Administration for Children’s Services (ACS) even if there is only a “reasonable cause to suspect” that abuse is taking place.

Ohel argues in its ad that extenuating circumstances for non-reporting exist “in cases of alleged abuse that may have taken place years earlier, or one of the parties involved may have emotional problems.”

In this case the abuse was believed to be taking place currently and not in the past. The law does not allow for non-reporting based on the emotional state of the suspected perpetrator.

In the case of the mother and son, however, the article never suggested that Ohel’s actions were “technically legal.”

The article’s reference to “technically legal” concerned Ohel’s treatment of self-confessed molesters referred to the agency by rabbis. The article called that practice into question from a practical/ethical standpoint and noted that it departs from protocol endorsed by professionals in the field, including the Association for the Treatment of Sexual Abusers.

The ad also accuses The Jewish Week of taking “deliberate pains to portray Ohel as an ‘Ultra-Orthodox’ Brooklyn agency.”

The article describes Ohel as “a social service agency based in Brooklyn.” The phrase “Ultra-Orthodox” with regard to Ohel as an agency does not appear anywhere in the article.

The only mention of that phrase in the article is in stating that Ohel operates in the context of the ultra-Orthodox community.

Meanwhile, The Jewish Week has learned that the 5-year-old boy at the center of last week’s article was removed from his family’s home nearly two years ago shortly after his mother, who suffered a nervous breakdown, was admitted to a hospital in the tristate area. At the hospital, according to sources, the mother disclosed the abuse and the hospital staff reported the case to ACS.

Earlier the mother had sought counseling at Tikvah, a branch of Ohel, and disclosed that she thought she “may be” sexually abusing the boy. Ohel chose not to report to ACS.

Last week’s article reported that the youngster had not been removed from his home. But according to a source closely involved with the family, the boy was removed from the home by ACS and is now living with his paternal grandparents. The source said that the mother had her parental rights terminated and that she has been granted twice-weekly supervised visits with her son.

When asked to comment on the case, an ACS spokeswoman told The Jewish Week that the agency is “not permitted by New York State law to provide information on whether or not a child has been in foster care.”