Marc Hermelin — the former chief executive of troubled drugmaker KV Pharmaceutical Co. — is scheduled to appear in federal court today for possible sentencing on at least one criminal charge related to knowingly distributing inaccurately calibrated morphine that could have killed patients. 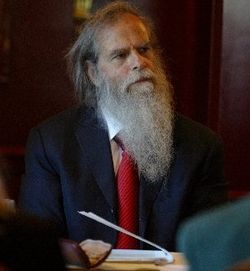 Marc Hermelin — the former chief executive of troubled local drugmaker KV Pharmaceutical Co. — is scheduled to appear in federal court today for possible sentencing on at least one criminal charge, according to court records.

Hermelin, who stepped down from the Bridgeton-based company's board of directors in November, is slated to appear at 1 p.m. before U.S. District Judge E. Richard Webber.

The court docket, posted Wednesday, indicates that Hermelin has elected to waive his rights to indictment and trial and instead to plead no contest or guilty to one or more charges. The document indicates he could be sentenced at the same hearing.

No charges have yet been publicly filed against Hermelin, but he has been one of the subjects of a long-running investigation by the U.S. attorney's office and the Food and Drug Administration. The federal investigation has centered on allegations that at least one top manager at KV failed to alert the FDA that it had made and distributed oversize morphine tablets, according to court filings by the U.S. attorney.

KV's wholly owned subsidiary, Ethex Corp., pleaded guilty in March 2010 on two felony counts of criminal fraud for failing to report to the FDA that it was making oversize painkiller tablets that could be dangerous to patients — and drew $27.6 million in fines and restitution.

Assistant U.S. Attorney Andrew Lay declined to comment on the Hermelin case. Hermelin could not be reached for comment. His lawyer, Peter Safir of the Covington & Burling LLP law firm in Washington, also was unavailable.

By 2008, KV was considered one of the most successful publicly traded companies based in the St. Louis area, posting nearly $600 million in revenue and employing 1,700 people. But the criminal case resulted in a two-year shutdown of KV's production facilities and layoffs of three-quarters of its work force.

KV initiated recalls of oversize morphine tablets in June 2008 but failed to report to the FDA its discovery of oversize tablets of other drugs, including medicine prescribed for irregular heartbeats and also an ingredient used in the attention deficit disorder drug Aderall.

According to criminal charges in the Ethex case, an unidentified KV executive weighed options in July 2008 for responding to the firm's discovery of problems with two additional drugs. Over the objections of other employees, the executive chose the "do nothing option," according to a court filing by the prosecution.

The unidentified executive instructed employees to "minimize written communications about KV's oversize tablet manufacturing problems and limit distribution and discussion of any documents discussing these problems," according to the prosecution.

Hermelin, former chairman of KV, was ousted as chief executive in December 2008 as the result of a company board investigation into mismanagement. In November 2010, he also ran afoul of the federal Department of Health and Human Services, becoming the first drug company executive banned from doing business with Medicare and Medicaid — a staple for any drugmaker. As part of his agreement with the agency's Office of Inspector General, he resigned as trustee of all family trusts that own KV stock, promptly divested himself of all voting interests in the company and agreed to divest his stock in the company over a timetable that neither KV or the agency has made public.

Robert Patrick of the Post-Dispatch contributed to this report.

Marc Hermelin was in 2008 (and may still be) the sole trustee of the Chesed V Emet V Avigdor Ben Yosef Family Foundation: 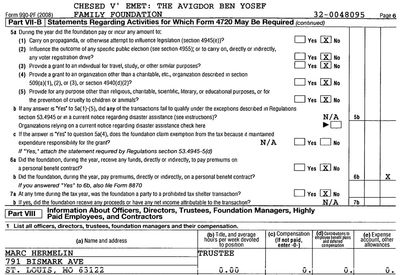 What follows is the list of individuals and organizations Chesed V Emet V Avigdor Ben Yosef Family Foundation funded in 2008, taken from the foundation's 2008 IRS 990 filing: 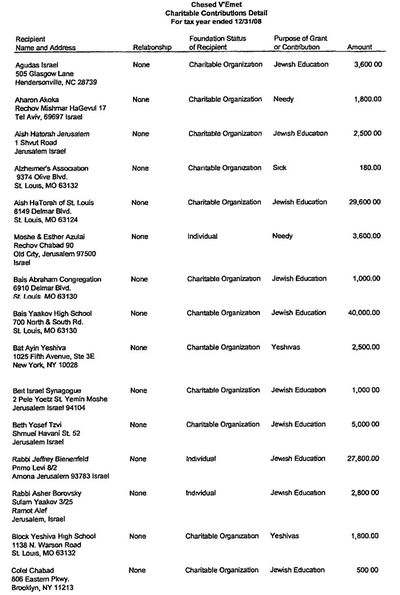 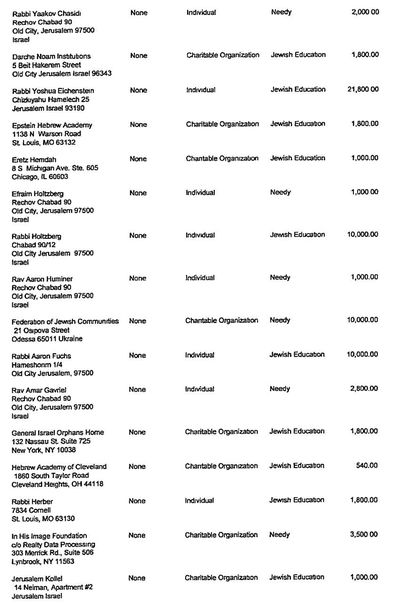 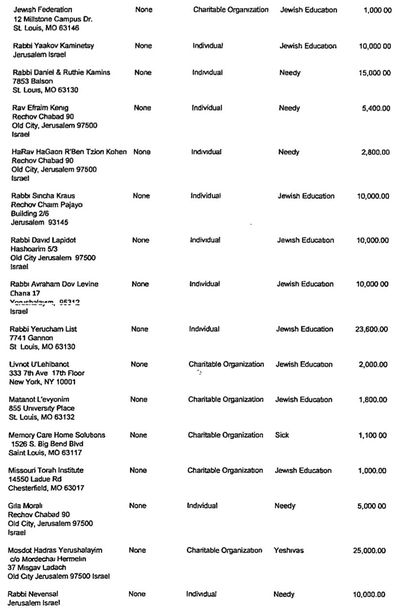 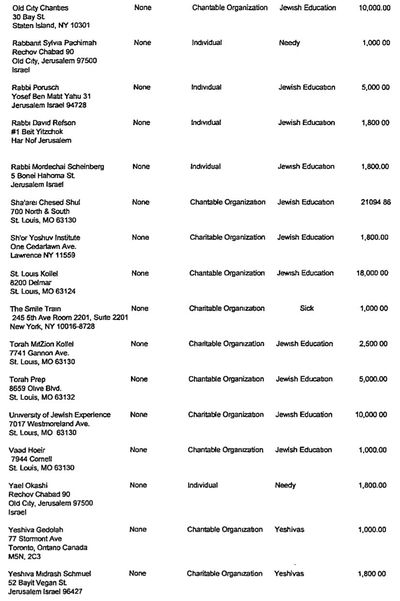 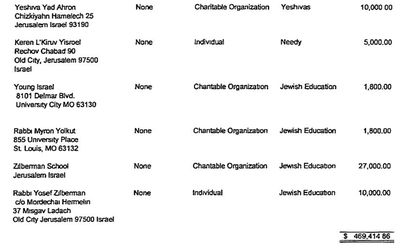 ATLANTA — The price of preventing preterm labor is about to go through the roof.

That's because the drug, a form of progesterone given as a weekly shot, has been made cheaply for years, mixed in special pharmacies that custom-compound treatments that are not federally approved.

But recently, KV Pharmaceutical of suburban St.Louis won government approval to exclusively sell the drug, known as Makena (Mah-KEE'-Nah). The March of Dimes and many obstetricians supported that because it means quality will be more consistent and it will be easier to get.

None of them anticipated the dramatic price hike, though — especially since most of the cost for development and research was shouldered by others in the past.

"That's a huge increase for something that can't be costing them that much to make. For crying out loud, this is about making money," said Dr. Roger Snow, deputy medical director for Massachusetts' Medicaid program.

"I've never seen anything as outrageous as this," said Dr. Arnold Cohen, an obstetrician at Albert Einstein Medical Center in Philadelphia.

Doctors say the price hike may deter low-income women from getting the drug, leading to more premature births. And it will certainly be a huge financial burden for health insurance companies and government programs that have been paying for it.

The cost is justified to avoid the mental and physical disabilities that can come with very premature births, said KV Pharmaceutical chief executive Gregory J. Divis Jr. The cost of care for a preemie is estimated at $51,000 in the first year alone.

"Makena can help offset some of those costs," Divis told The Associated Press. "These moms deserve the opportunity to have the benefits of an FDA-approved Makena."

The U.S. Food and Drug Administration is not involved in setting the price for the drugs it approves.

A KV subsidiary, Ther-Rx Corp., will market the drug. On Tuesday, Ther-RX announced a patient assistance program designed to help uninsured and low-income women get the drug at little or no cost.

But Snow and others said someone is going to have to pay the higher price. Some of the burden will fall on health insurance companies, which will have to raise premiums or other costs to their other customers. And some will fall on cash-strapped state Medicaid programs, which may be forced to stop paying for the drug or enroll fewer people.

"There's no question they can't afford this," said Matt Salo, executive director of the National Association of Medicaid Directors.

Salo and Snow said they do not know how many state Medicaid programs currently pay for Makena, which as a generic was recommended by the American College of Obstetricians and Gynecologists.

Aetna will continue to pay for the drug, Armstrong said, but it will be an expensive pill to swallow. Aetna currently covers it for about 1,000 women a year, so the new federal endorsement is likely to cost an estimated $30 million more each year.

Makena is a synthetic form of the hormone progesterone that first came on the market more than 50 years ago to treat other problems. Hormone drugs came under fire in the 1970s, following reports they might damage fetuses in early pregnancy. In the 1990s, the early incarnation of Makena was withdrawn from the market.

But the drug got a new life in 2003, with publication of a study that reported it helped prevent early births to women who had a history of spontaneous preterm deliveries.

These very early births produce children who — if they survive — need months of intensive care and often suffer disabilities. The cause of sudden preterm delivery is not understood, but it occurs in black mothers at much higher rates than whites or Hispanics.

The study of women at risk for this condition found that only about 36 percent of those given the progesterone drug had preterm births, compared with 55 percent among those not on the drug.

It's believed the treatment calms the muscles of the uterus, experts said.

There is no good alternative in most cases and in the years following the study, more obstetricians, Medicaid programs and others began prescribing it. By some estimates, about 130,000 women a year might benefit from the drug. Only a fraction of them get it, but the number has been growing steadily.

One success story is Beatrice Diaz, 33, of Chapel Hill, N.C.

During her first pregnancy nine years ago, Diaz unexpectedly went into labor at about 24 weeks. She delivered a son, Garrison, who was so fragile she was not allowed to hold him for a month. Today he is in a wheelchair and has the mental capacity of a 9-month-old.

It was a shock, said Diaz, who at the time was a legal assistant in a prosecutor's office.

"Honestly I thought the only people who had 1-pound babies were crackheads," she said.

When she became pregnant again, her doctor prescribed the progesterone drug, a weekly injection that starts as early as the 16th week and may be given for as much as 20 weeks. She has since had two healthy, full-term baby girls, Hailyn and Alexa.

Diaz said she's not planning to have any more children — and that's a good thing.

"That's an insane amount of money. I don't know what I would do to get the money to afford it."

The Ther-Rx patient assistance program promises free injections or much reduced prices based on income. Uninsured households making less than $100,000 are eligible for a copay of $20 or less.

Ther-Rx and its parent company became involved about three years ago and acquired rights to the drug from a Massachusetts company named Hologic Inc., said Divis, who is also Ther-Rx's president.

To get FDA approval, the company is spending hundreds of millions of dollars in additional research, including an international study involving 1,700 women, Divis said. The FDA last month signed off and gave Makena orphan drug status. That designation ensures Ther-Rx will be the sole source of the drug for seven years.

The March of Dimes, which gets hundreds of thousands of dollars in funding from Ther-Rx, celebrated the approval in a press release, saying if all women eligible for the shots receive them, nearly 10,000 spontaneous premature births could be prevented each year.

"For the first time, we have an FDA-approved treatment to offer women who have delivered a baby too soon, giving them hope that their next child will have a better chance at a healthy start in life," said Dr. Alan Fleischman, the organization's medical director.

As for the cost, he said the drug maker's financial assistance program will ensure no eligible woman is denied the drug due to inability to pay.

Some doctors said they were happy getting the cheaper version from compounding pharmacies, and Aetna's Armstrong said she was unaware of any quality concerns.

Still, doctors will use the Ther-Rx brand, in part because of legal worries.

Not that they have a choice: Last month, KV sent cease-and-desist letters to compounding pharmacies, telling them they could face FDA enforcement actions if they kept making the drug.

Marc Hermelin — the former chief executive of troubled drugmaker KV Pharmaceutical Co. — is scheduled to appear in federal court today for possible sentencing on at least one criminal charge related to knowingly distributing inaccurately calibrated morphine that could have killed patients.